Did you see the actor Dennis Quaid on 60 Minutes last week? He talked about the sad case where his twin babies were mistakenly overdosed TWICE at Cedar-Sinai Hospital in Los Angeles.

His babies are recovered now, thankfully. The silver lining on the sad case is that Quaid, as an actor and celebrity can become a powerful voice and advocate for patient safety and preventing systemic errors – highlighting the problem AND suggesting countermeasures and systemic fixes. 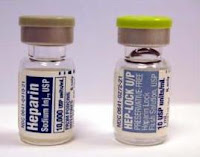 As Quaid recounted the story, he first seemed to blame the nurse: “The nurse didn't bother to look” at the dose (the correct dose, on the right, and the incorrect dose are both pictured here). Later, he mentioned, correctly, that a series of errors had occurred. As I've said before, it's too simplistic to just blame or punish a single person when an error like this occurs. That approach certainly doesn't help prevent other such errors.

He said the babies had been given TWO massive overdoses in an 8-hour period “that we know of,” he said — again, the signs that there's suspicion of a cover-up. It also highlights what a systemic error this is, that it could happen twice in the same hospital. It was a chain of errors that occurred. First, someone in the pharmacy picked the wrong dose. Secondly, a pharmacist is supposed to double-check any medications that leave the pharmacy (an inspection step). That's two people who are supposed to “bother” to look at the label. Then, there's the person who delivers the medication to the ICU. Finally, the nurse is the last in that chain. But, the nurse isn't expecting that the adult dose of Heparin is even there in a neonatal unit. So, pretty easy to let your guard down, right? I don't think that's an excuse, that's just reality.

Quaid was right to say the errors were “avoidable” — pointing out it was the same avoidable errors as the case where three babies died at Methodist in Indianapolis.

Quaid has become pretty obsessed with researching the topic (he was shown on the computer, maybe he's been on this blog?) and discovered the errors happen “everywhere.” He cited the “100,000 deaths a year” number (which comes from the late 90's study from the Institute of Medicine. Quaid said, “This is bigger than AIDS, bigger than breast cancer… yet nobody seems to be really aware of the problem.” I'm glad Quaid is trying to spread the word and to help others. 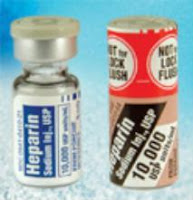 There was a lot of talking about the old labeling being too similar across the two bottles. The new label (pictured on the right) is better because it's not just a different shade of blue and it requires a different motion (tearing off a paper cover) that is not required for the smaller Hep-Lock dose that is intended for babies.

The old stock (the old, more mistakable labels) was NOT recalled. Cedar-Sinai was using up their old stock first (sure, it was “FIFO” or First-In-First-Out, something Lean folks generally like), but that shouldn't have been the case when safety was at risk. What responsibility does hospital administration take for this materials decision?

The maker of the drugs, Baxter, had a spokesperson on 60 Minutes who reminded us that people were supposed to read the label (again, casting blame), even though the labels had been mistaken many times before by other nurses in other hospitals. But they redesigned the labels after earlier incidents. It was not necessary to recall, 60 Minutes asked? The Baxter spokesperson said “No, the drugs were safe” and that it was due to preventable errors in the hospital's system.

The CEO of Cedar-Sinai admits it was human error, preventable error. The CEO said “you need backup systems” and CBS's Steve Kroft asked, “but you had backup systems, you had three people.” How many more backups can you add? More inspections and more backups isn't necessarily more effective due to, here it is again, “human error” in inspection. When many people are checking something, it's human nature to let your guard down because the “other person” will get it.

So what is my advice? Hospitals need to bee proactive, with this and other known risks. Leaders need to manage the process, not just reacting after bad results. If you're in a similar hospital setting, are YOUR people double-checking the medications? Are you spot checking this to see if it's really the case? There was “standardized work” (the Lean term, the hospital probably called it “policy”) in place to double check the medications, but administration took their eye off the ball (if it was ever on there). We need to move from “policies” (which are never “policed”) to a “standardized work system” where supervisors and leaders are working WITH their employees, checking to see if key processes are being followed, BEFORE harm occurs.

Kaizen and Theory of Constraints

Cleaning Out the LeanBlog Backlog – March 27