Updated: How Often Must the Same Mistake Be Repeated?

If this story sounds familiar, it's because it is the exact same error as one that killed three babies in Indianapolis last year. This time, the error has harmed the twin babies of actor Dennis Quaid. The babies are reportedly in stable condition at L.A.'s Cedars-Sinai hospital and will hopefully pull through. My thoughts and prayers go out to the Quaid family.

This was truly a preventable error and something that should have never occurred. So what is the response? Do we ask “who did this?” or “why did this occur?” Those are two very different questions.

First off, let's give the hospital credit for their public response:

“Cedars-Sinai spokesman Elbaum said no employees had yet been disciplined because “our focus tonight is on quickly determining what needs to be done to make sure it doesn't happen again.” For instance, all 1,800 nurses coming on duty beginning Tuesday night will be retrained on medication safety practices before they begin seeing patients. Other steps also will be taken.”

It says “had yet been” disciplined, meaning I guess they are leaving that door open. Focusing on why it happened and making sure it doesn't happen again are good problem solving responses. With Lean, we first want to ask “why did this happen?” instead of “who screwed up?” The chief medical officer was quoted on the news as saying it was a “preventable error” but he also said that procedures and standards were not followed. That sounds like a precursor to throwing someone under the bus for not being careful.

In the Lean approach, management has a responsibility to ensure that “Standardized Work” is being followed. If the standardized work (or procedures) say that nurses are supposed to double-check the labels, how often does management spot check that the right process is being followed? A Toyota plant does not just assume that the work is being done properly, the managers and supervisors are constantly auditing and checking that procedures are being followed. They are not waiting for a defect or customer injury to occur first.

People were blamed in Indianapolis. But that didn't prevent the problem from happening in L.A.?

Cedars-Sinai is now taking reactive measures to train and raise awareness. Why was that not happening already? Does every single hospital have to make the same mistake before they take preventative measures? How about being proactive? How about we not rely on asking people to “be careful?”

In Indianapolis, they have “double checks” which is like a “double be careful.”

“Nurses at Methodist didn't check the label and administered the wrong dosage. After the incident, the hospital required a minimum of two nurses to verify any dose of blood thinner used in the newborn and pediatric critical-care units, among other steps.”

That's just another form of inspection. It doesn't prevent the root cause of the problem. We can't rely on people to be careful, especially when nurses often work 12 hour shifts. People get tired, we're human, we make errors. That's why the Lean philosophy of error proofing is so powerful. It recognizes that people make mistakes, so we design systems that make it less likely for errors to occur. And don't call it “dummy proofing.” The nurses who make these mistakes aren't dummies. This might have been the only mistake they've made — they were careful every other time, but here was one mixup that can have fatal consequences.

A professor of pharmacy in San Francisco was quoted as saying:

“This is not an unheard-of error,” Kayser said.

It sure is. The FDA and Baxter issued a warning in February 2007. And we're going to keep hearing about it until every hospital takes proactive and preventative measures to keep this from happening. Reacting after an incident shouldn't be looked upon favorably.

Baxter's recommendation, for now, was to “be careful” basically:

Both products use blue as the primary background color on their labels, though in different shades.Baxter is looking for ways to vary the packaging to prevent future errors. In the meantime, it suggests that healthcare workers check their inventory to ensure no mix-up has occurred; notify staff of the problem; be sure not to rely solely on package color to identify a product; and always read the label and verify that the correct dose and product are being used. 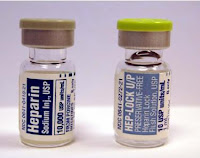 Look at the packaging. Sure, they don't look identical, but imagine you're in a somewhat dark patient room at 3 a.m. Why isn't the stronger dose in a larger form factor bottle?? Or a different shape? Or maybe the adult dose bottle can have sharp jagged edges to poke the nurse to make sure they are being careful? We need error proofing devices, not “being careful.”

If I ever have children, and they're in a hospital, I'm going to be a nervous wreck. My advice to others would be to have someone monitoring your child and their care 24 hours a day. You can't trust the system to protect them for you, unfortunately.

There is a surprisingly intelligent and informed comment on the E! Online website, discussing this problem (scroll down to the 4:27 comment). The comment actually comes from this blog posting, written by a nurse. Surprisingly, she primarily blames the nurses!

Yes, nurses in this day and age are very rushed to get everything done for their patients, and there is definitely not enough time in the day to get it all done. Nurses are overworked, underpaid, and stressed to the max. We are assigned to too many patients at times, creating unsafe situations for the very people we are here to help. But by skipping the very foundations of safety, we are putting each and every one of our patients at risk for medication errors, injury and potential death.”

Can you really hold people solely accountable when they are overworked, stressed, or tired? I'm not saying people have zero responsibility, but merely blaming someone for firing a nurse won't prevent this from happening again. Training will help, at that hospital. But what about the others? I wish the media would go to the OTHER hospitals in L.A. and ask, “So what are YOU also doing to prevent this?”

Maybe this story will get the right kind of coverage since it's a celebrity's babies?

Update: This blog says the error was a result of a technician storing the drug in the wrong location.

Update: This site (lawyer alert) says that Methodist had made the same mistake five years before killing the three babies last year. The news article he links to says:

“The parents of one of the children overdosed five years ago were assured by the hospital that steps were being taken to ensure the mistake was not repeated, but those steps didn't stop it from happening again.”

That's why being careful or even saying “we have procedures and policies” doesn't work. At some point, hospital leadership should be held accountable, not just individual workers.

The lawyer has it wrong when he says:

“Administering an adult dose of Heparin to an infant is the type of error that should only happen once in the history of a hospital.”

No, it should never happen. Hospitals need to be proactive and NOT wait until a mistake is made. We need Lean and Toyota Production System methods to spread within health care.

Update (9:51 PM): This blogger (another lawyer!) reports that the celebrity site tmz.com is reporting:

We're told one dose was given on Sunday morning, another on Sunday evening.

We're told as many as thirteen patients at Cedars were mistakenly given the overdose of Heparin, but the effects are more critical because of the age and weight of the twins.

Wow, that is one hell of a systemic problem. It's not as simple as one nurse being careless one time if the Quaid twins were overdosed TWICE and it happened with other patients. Yikes, how is someone “not careful” that many times??

The lawyer then, predictably, goes on to rant that problems like this happen because hospitals aren't as afraid of being sued anymore, thanks to tort reform. Ah, the fear of lawsuits, the best path to quality! Not really. He also confuses the heparin dosing error with the “heparin and insulin confusion” error, which the FDA also gave a warning about and also happens all over the place.