"Bad Systems in the News" Update

Here are some updates on the “Bad Systems” I featured last week, Northwest Airlines and the NBA. I know I promised more positive posts, but let me follow up on these stories…

First, the NBA. I don't have a link (now I do), but I heard an interview on ESPN Radio with one of their expert NBA analysts, Rick Bucher, about the NBA referee oversight system. As I wrote about before, the refs have observers (allegedly poorly trained) who review games and second guess calls. The refs get performance reviews and their scores/rankings are used to determine playoff assignments and, I assume, pay raises.

It's a classic “performance review” system, in the model of most Western management. It's a “continuous review” (so it is better than an annual review), but the feedback is very slow. Bucher said the refs might not get “feedback” about their calls until eight days after a particular game. Bucher passed along the refs' frustration that they are second guessed by people they feel aren't qualified to do so. That could be almost any workplace, where technical people (the refs) are “supervised” by pointy-haired Dilbert boss types. 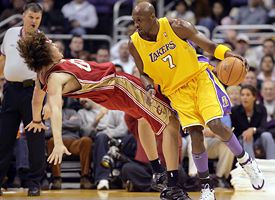 Bucher talked about the increase in players “flopping” to try to draw calls (think most of the San Antonio Spurs, particularly Manu Ginobili). Many fans (yet alone the players) get frustrated with this and the impact it has on the game. Bucher said the referees “aren't fooled” by the flopping, but their observers tend to “ding them” for what the observers (who are fooled, I guess) would consider “non calls.” So, the performance management system appears to harm the game, as refs are making calls based on how they will be evaluated, not based on how they were taught to referee. A bit dysfunctional, eh? For fun, here's an ESPN list of the Top Ten floppers of all time. And here's an obvious NCAA flop, via Youtube.

The other thing that struck me, and again reminded me of Deming and he problems with “Management by Objectives” and performance management systems, was Bucher's comments that many refs are complaining about losing their “passion for the job.” Deming said everyone had a right to joy in their work, and here's a classic example of NBA management stripping referees of that joy or passion. Sad. Deming also said (page 54 of Out of the Crisis):

“Leaders must know the work they supervise…. In most organizations, this is only an idle dream, as the supervisor knows nothing about the job.”

Now, to Northwest. The airline has a systemic problem, at least the last two months where the company has to cancel flights at the end of the month because they don't have enough pilot flying hours remaining. The company blamed the pilots, but, oh yeah, management also took away pilot overtime pay, so the pilots aren't exactly in the mood to voluntarily work additional hours.

In this WSJ article ($$), CEO Doug Steenland throws out the ridiculous excuse that they had an “unforeseen pilot shortage.” What? Again, this makes me think of Deming, but it's management's job to forsee such things.

Steenland, himself, admits that the company erred in increasing flight capacity by 4% without increasing the number of pilots, and, oh yeah, that overtime plan wasn't too popular with the pilots. So, they're cutting capacity, adding pilots, and have reinstituted the overtime pay.

I'm really trying hard to keep my “respect for people” hat on, but I'm still going to call Northwest management a bunch of morons. This is the kind of great management talent that you pay huge “retention” bonuses to? “Bollocks,” as my friends in the U.K. would say.

Final thought, a quote from an industry analyst:

“It's great that they're finally coming to an agreement, but it's an absolute shame that thousands of vacations had to be ruined to settle their differences,” said Terry Trippler, an airline consultant in Minneapolis.

“Northwest Airlines has unbelievably bad employee-management relations and it's going to take a long time to repair it, if it can even fix things,” Trippler said.

Not to mention their customer relations, at this point. CEO Steenland says they are going to try to “mollify” their customers (that's his favorite word, apparently). Back in June, they promised to mollify everybody and I guess they still haven't learned how. How about you stop angering employees and customers first? That sounds like good business to me.

Another great quote from a NY Times article on the industry mistreating customers:

“Previously, airlines worried about dissatisfied customers,” said a Wharton professor, Serguei Netessine. “Now I don't think they worry about it because the customer service at all airlines is so horrible.”