Bad Systems in the News: Northwest 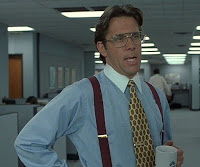 Updated: NWA calls back all its pilots as cancellations mount

In another example of media/management blaming, Northwest Airlines is blaming pilots for forcing the airline into canceling flights at the end of July.

Northwest Airlines blamed a spike in canceled flights Friday on pilot absenteeism and warned that it would probably cancel more flights over the weekend.

Blame, blame, blame. Of course management would blame pilots instead of their own mismanagement. It's much harder to look in the mirror than it is blaming others. How might you guess this is somewhat of a systemic problem? The fact that they had the same problem at the END of JUNE. Same bad pilots? Ha, more likely the same bad management.

The union points the finger (which one, I'm not sure) back at the management team that led the airline into bankruptcy (shame on them) and out of bankruptcy (bringing big retention bonuses).

“We continue to maintain that this is a staffing issue,” said union spokesman Monty Montgomery. “We notified the airline months ago that there isn't adequate staffing to fly the summer schedule.”

As The Consumerist points out, Northwest hasn't brought back enough pilots after the bankruptcy and schedules are heavy. They quoted business writer Joe Brancatelli:

Northwest is trying to operate with about 25 percent fewer pilots and co-pilots than it employed in 2000. The inevitable result: massive crew shortages at the end of June when Northwest's remaining pilots “timed out” and could no longer fly. (According to federal regulations, pilots cannot fly more than 100 hours a month.) Northwest canceled more than 1,200 flights during the last 10 days of June. The final 10 days of July and August won't be much better.

Northwest is playing the usual airline game of sticking it to the employees. The pay for pilots and flight attendants gets slashed, while corporate execs feed at the greed trough. Where is “respect for people” in the airline biz? Can you blame pilots for not volunteering to fly beyond their normal schedules when the airline isn't bringing back their colleagues? It's like the scene in the movie Office Space where the boss tells Peter that they're a bit short on people (after a layoff), so he's going to have to work Saturday AND Sunday.

That's why so much of leadership comes back to basic human psychology, as Deming was fond of pointing out. You often have to step back and ask, “How would you expect people to react?” Sort of like when we talk about the need for a “No Layoffs Due to Lean” pledge. When lean efficiency improvements lead directly to layoffs, why would you expect employees to remain enthusiastic for Lean? Would you expect pilots to rebel by calling in sick to Northwest? Why should they go out of their way to help the company when they're continually dumped on? It's a shame when companies get focused on fighting internally instead of fighting the competition.

On a somewhat related industry note, American Airlines was fined about $250k for safety violations at O'Hare. As the site The Consumerist said:

We don't know about you, but it makes us uneasy to hear that an airline is being irresponsible with the safety of its employees. How then, does it feel about the safety of its customers? If the employees aren't doing their jobs in a safe environment, what makes you think you're flying in one?

What a messed up industry. If you look at the “old” carriers, it's probably a more across-the-board mess than the Detroit Three.

Updated: The updated link I posted at the top says that Northwest is trying to bring back the rest of their furloughed pilots, but:

“A significant percentage is choosing to not come back,” Montgomery said, though he was unable to provide a specific number.

The way management treats them, can you blame them if they have other options?

Previous contracts considered anything above 80 hours of flight time overtime. Pilots are no longer paid overtime.

“We're having all our pilots fly overtime with no extra pay,” Blaufuss said.

Not Cutting Their Way to Greatness

Instead of Blaming the Worker, Look at Psychological Safety