Moving from “Visuals” to “Visual Management” and to Broader Lean Thinking

I've been studying and working with Lean for 20 years now and I love Lean because I'm still learning and getting better at this craft. I love seeing other people get excited about Lean when it's new to them, when they see the potential for improvement and the power of Lean.

But, sometimes people get excited about things that aren't really Lean.

One example of something that makes me cringe sometimes is talk about “visuals.” People sometimes point at charts or metrics on the wall and want to celebrate having visuals. Yeah, visuals! It's good to measure performance, but that's not necessarily “visual management.” I've seen some folks who seem to think that charts and metrics are the only type of visual management… but that's not really true.

Let's say there's a sign that instructs patients to remember to bring their insurance card, but it's posted too far into the process to be helpful (as I wrote about here). OK, that's a visual. But it's not visual management. It's nothing to celebrate if it's a poorly designed countermeasure that didn't solve a problem that's part of a bad system.

Or, there's a sign telling staff to be careful and not forget something or not make a certain mistake. Hospitals love putting up signs like this, even before Lean. Yeah, a visual! Is that really worth celebrating? Is that really Lean? Instead of celebrating the visual, a Lean thinker would probably work on improving the system in some way to help prevent errors.

For example, this sign is a “visual” but it's not a good example of error proofing (on some equipment in an anatomic pathology lab): 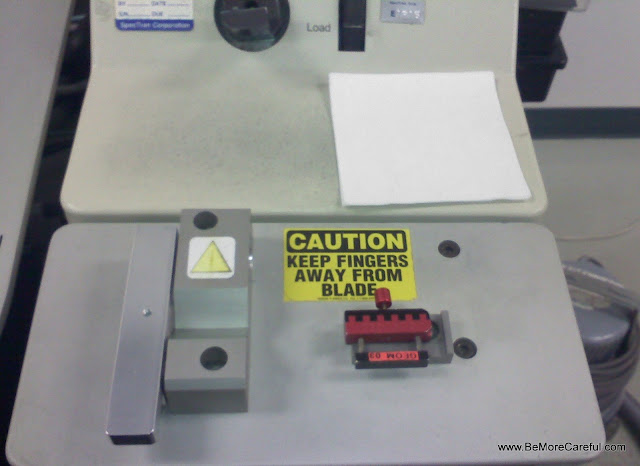 My friend Jon Miller shares an example of an unhelpful visual and has a great saying:

He calls the shower hot water warning a “visual control,” but I'd argue it's just a “visual.”  The presence of the sign neither manages nor controls anything!

Here's the Key to Visual Management:

To me, the core of visual management is captured in this statement from Fujio Cho, now the honorary chairman of Toyota:

If the “visual” isn't helping accomplish that goal, it's probably not visual management. Visual management has two parts – the visual (something you see) and the management (the action you take based on the visual). Why do we have to manage the visual abnormality? To get better results.

Here's a variation of that Cho quote from the outstanding new book Management Lessons from Taiichi Ohno: What Every Leader Can Learn from the Man who Invented the Toyota Production System

So, back to hospital settings, look at this example of what somebody might celebrate as a visual (there are three of them!) Would somebody actually SEE if the pharmacy machine were being operated without the guards being in place? Would you see this and immediately to be able to manage it? Maybe or probably not. To a Lean thinker, the machine should be error proofed so it cannot be operated with the guards removed.

Factories and hospitals normally have some form of charts and metrics on the wall. That doesn't mean they are practicing Lean and those charts aren't necessarily visual management. If the charts show monthly averages that lag a month or two behind, does that help you see the difference between normal and abnormal right now? Probably not.

Look at a Toyota plant (or any modern car factory). They have painted lines on the floor of the assembly line that indicate if the job cycle has fallen behind (or is running too far ahead, which might be bad, as well). You can see (on the LEI website) the Lean Lexicon description and illustration of what's called a “Fixed-Position Stop System.” If somebody pulls the andon cord, indicating a problem or a concern, then the line stops if the vehicle gets to the final line that's painted on the ground before the problem is resolved.

The lines can also show if there's certain work that should be completed by the 30-second mark, the visual position of the vehicle can show you there's a problem… the work has fallen behind. It's abnormal. You see it immediately (if you're looking).

Supervisors and the team don't have to wait for some sort of hourly or daily metric to be updated.

In hospitals, leaders are often concerned if hourly rounding is happening as it should. As I wrote about here, a department might keep an hourly check sheet that shows if hourly rounding occurred each hour. That check sheet is a form of visual management, as you can walk by and see if there are missing checkmarks for an hour. But, the check sheet can make it hard to see the difference between normal and abnormal from a distance. So, we might use clocks like these that show a real-time view of whether or not hourly rounding is occurring.

The clock is a visual. It's only “visual management” if somebody sees the abnormal situation (a white clock face that indicates that it's been more than 60 minutes since rounding, or it's possibly somebody didn't reset the clock). When management reacts (by asking why instead of yelling or blaming), then that's visual management.

5S can be a form of visual management. Let's say we have a taped outline that shows where a rack full of completed blood specimens should be placed. If it's sitting in the wrong place, there's a visual that shows an abnormal condition. Then, what happens? If nothing, then it's not visual management. In this next scenario, there's a visual (hard to see) that says that spot on the floor is supposed to be the parking spot for the Philps BV 26 Tower. And that label shows it supposed to be kept in E Storage. Could the visual be better, to make abnormal more apparent? Yes, definitely. There could be a big sign with a picture of the machine hanging on the wall above its spot, making it easier to see what's missing or if the wrong thing is parked there. And, if something's abnormal, who is managing the visual?

When I worked for ValuMetrix Services, as part of Johnson and Johnson, I think we did a good job of explaining visual management in our training for clients. These are slides from 2008. Visual management has to go beyond a few charts and metrics and a few warning signs. Let's stop celebrating visuals that aren't really solving problems or improving performance.

Instead, follow the guidance of Fujio Cho… how can you make abnormal visible and what are you going to do to manage or correct that situation, in the short-term and the long-term?

What do you think? Do you see a misplaced focus on “visuals” instead of good “visual management?”