I saw this story when it originally appeared online as part of a local public radio station in California. It was now picked up nationally by NPR and a number of you emailed me about this Lean healthcare piece about UCLA Medical Center:

Hospitals Turn To Toyota To Make Care Safer And Swifter

It's a generally positive story about a large hospital system working to improve… and turning to Toyota (directly to Toyota) for help. To be fair, they did far more than organize closets… but that was the story that started the piece.

“Until recently, nurses at Los Angeles County Harbor-UCLA Hospital had to maneuver through a maze of wheelchairs, beds, boxes and lights to find surgical supplies in the equipment closet for the operating rooms.”

That's still such a common story even though Lean has been used in healthcare for over 15 years. There are still many health systems missing basic 5S practices. That surprises me in this case since UCLA has had a formal Lean program for a while. I had a chance to visit a few years ago and they had hired people who formerly worked in manufacturing.

“They are adapting the carmaker's production system to health care — changing longstanding practices such as how to store equipment, schedule surgeries and discharge patients. The philosophy, known as lean, depends on a continuous team effort to pare inefficiency and improve quality.”

Thankfully, the story didn't incorrectly portray Lean as just being about speed or efficiency. It's also, at the core, about quality — as Toyota explains. Journalists always have to present both sides of a story. I was interviewed a few years ago for a story in the New York Times about Lean at Seattle Children's Hospital and the reporter was having trouble finding anybody with an opposing view about Lean. I was afraid they wouldn't be able to run the story without that opposing view, so I actually made introductions to a nurses' union who had a history of criticizing Lean (incorrectly, I think).

So a similar thing happens here:

DeAnn McEwen, a health and safety specialist with National Nurses United, says lean management reduces nursing to a series of standardized tasks, as if nurses were robots applying nuts and bolts to identical patients.

“The problem with that is patients, of course, are not widgets and nurses are not robots,” she says. “And nursing care is not a commodity but a service. It's a process that requires critical thinking and the application of judgment.”

It's not true that Lean turns people into unthinking robots. That's not true at Toyota and it's not true in a Lean hospital. McEwen is arguing against a “straw man.” Of course, patients are not widgets or cars.

It makes me think of this Captain Obvious meme: 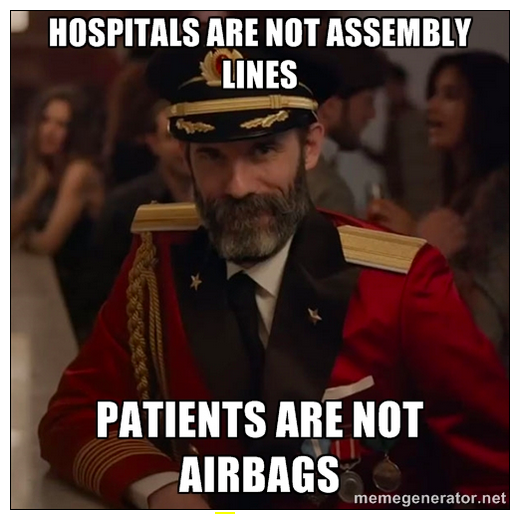 By the way, THESE are hospital robots… and I'm not convinced they are necessarily the right thing to do when you consider all of the pros and cons and all of the other ways you could free up time for people through process improvement. I worked with one hospital that tore out its pharmacy robot because it wasn't really saving any labor and the robot choosing the right med still had some risk of human error in the medication supply chain… so they decided it wasn't worth it. Lean organizations don't throw technology and robotics at everything (see past posts about hospital robots here, here, and an article here).

But back to the non-robot humans… working in a car factory requires critical thinking and the application of judgment… the same is true with Lean healthcare. Lean has, in so many cases, resulted in improvements in patient safety and quality and it's not like hospitals without Lean are safe to begin with (see the stats). Saying “patients are not cars” is true, but not a compelling argument against Lean.

Back to the article and UCLA… Susan Black is the hospital's “chief kaizen promotion officer” as of 2013. She says Lean “is not a flavor of the month.” For that to be true, I'd add, the other hospital chiefs need to be on board with Lean and Kaizen, not just the main Lean person.

Jamie Bonini (who I've written about before) is the head of the Toyota Production System Support Center. They famously helped the NYC food bank as you can see here.

“Before, it was total chaos,” says Tracie Bell, a nursing attendant. “We had piles and piles of paper. With this new color-coded system … it makes it a whole lot easier for us to do our jobs.”

Within several months, staffers doubled the average number of new patients seen each day. In addition, the time patients spent at the clinic dropped from 4 1/2 hours to just over two. Surgeries also got scheduled more quickly.

Those are great results and, it seems, a great start (or a reboot) for Lean at UCLA Medical Center.

The reader comments on the story are interesting – some advocates for Lean and some who are, shall we say, not impressed.

These people couldn't re-organize a closet without taking inspiration from an external source? Remind me never to go there.

It made me think of the “McKayla is not impressed” meme, as it would look like here: I continue to be appalled at the sloppiness of hospitals. Why does surgery require the lessons of pilots to have a simple check list before commencing? Do they not see the need for being careful and thorough to avoid cutting off the wrong leg?! I think it goes back to the arrogance of doctors and males and the way they treat their underlings. Organizing the closet is a new concept?! Almost any business which does not even work with life and death has an organized closet. I work with them; I see them; I'm even paid to do the organizing. You don't need Toyota to figure out what is needed. I have great fear of being in a hospital, particularly for surgery. Will they ever get their act together?

Well, aviation has shown that safety does not come from “being careful.” It comes from teamwork, processes, training, and checklists. Healthcare could use all of that…

Improving efficiency is not a ‘toyota strategy'. It's common sense for any business or organization.

If it's just “common sense,” why isn't it more common, even in manufacturing? Some things about Lean are actually quite counterintuitive (such as the smaller batches can be more efficient).

I'm working on a 3rd revised edition of my book Lean Hospitals and every edition has emphasized, going back to 2008 and the original publication, that we should never standardize for the sake of standardizing. Standardization must be done thoughtfully and it must solve or prevent important problems that matter. We must engage the people who the work to make sure we standardize things that matter and to the right level of detail.

Good luck to everybody at UCLA (and every other health system that has big opportunities for improvement).

New from KaiNexus: Blog Posts, Podcasts, and Upcoming Webinar (and Some Tunes)