By Mark Graban On May 20, 2009 Last updated May 8, 2017
6
Share FacebookTwitterLinkedinPinterestEmailPrint

I blogged recently about a radio ad from the Detroit Medical Center trumpeting their technology and patient safety efforts.

In my further travels, I saw this billboard (from a hospital that's a competitor of a client… and no, I won't tell you who or where). 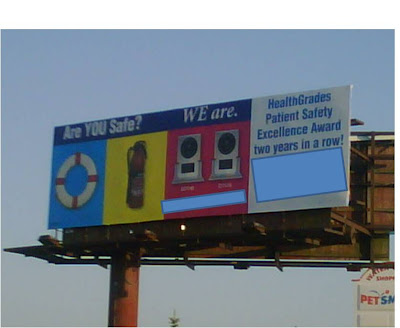 So the hospital declares itself “Safe”? That sounds like a bit of an absolute, doesn't it? Does that mean perfectly safe or even “Six Sigma Safe”? Their competitor, my client, has won the same award FOUR years in a row (not because of Lean and not because of anything I did).

Does the hospital with the billboard mean to say they are “less safe than the other” or “safer but more recently so?” It seems like it would be a lawyer's field day if something went the least bit wrong (which is likely in the typical hospital)…. “but you said you were SAFE”!!!!!

For such a serious topic, it's a pretty meaningless billboard, don't you think? Or am I over thinking this?

I tend to agree with Paul O'Neill's statement in the video “Good News: How Hospitals Heal Themselves” that patient safety and quality should NOT be a differentiator amongst even competing hospitals. Safety and quality should be a given (it's not) and it should have uniformly high levels — all of the patients at each hospital deserve as much.

Observations from One End of the Hospital