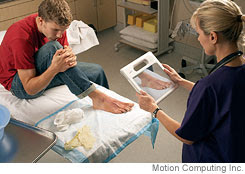 Is this a “siren song” of technology for healthcare? Executives and managers in any industry, it seems, believe in the promise of technology as the solution to problems.

At best, such as with this Intel-developed tablet PC designed “especially for RN's”, it's only part of the solution, or at worst, it's a waste of money that could be used in other areas.

For any hospital considering this sort of purchase, I implore you:

Intel, of Santa Clara, Calif., last year helped to establish a multicompany alliance called Continua to define medical-technology standards, and the company has set up a “digital health” group for its strategy to develop combinations of computer chips and other technologies for specific markets. With Motion, Intel deployed demographics researchers to study how nurses work, consulted with them and tested tablets at three hospitals, said Louis Burns, vice president of Intel's digital-health group.

Motion, a closely held tablet maker in Austin, Texas, already gets about half of its sales from the medical industry. It worked with a medical-software maker to ensure the new tablet can exchange information easily with hospitals' record-keeping systems, said Scott Eckert, Motion's chief executive.

One regular chore for nurses is taking a patient's temperature, blood pressure and other vital signs. They often end up writing the data on scraps of paper, or even on their hands, before returning to a nurse's station to enter the data into a PC — sometimes as much as two hours or more later.

“The accuracy of that data erodes over time — they forget some of it,” said Michael Blum, an associate professor of medicine who holds the title of chief medical informatics officer at the University of California at San Francisco, whose medical center hosted a news conference to discuss the new tablet yesterday. “Equally important is that the doctors don't have access to it right away.”

Here is a clear process problem — RN's are too busy and/or don't have standard work to make sure they can record patient information immediately. If they're so busy, today, that they're having to scribble data on their HANDS, are they going to have time to learn the new system and to actually use it?

As this PBS documentary showed, doctors have been incredibly resistant to using electronic medical record, electronic order input systems, or computers, in general, in some cases (hell, they're incredibly resistant to washing their hands properly). One difference is that the nurses are hospital employees (most of them) as opposed to MD's, who are generally independent contractors. It's easier to “tell RN's what to do,” not that doing so is the preferred change management methods. If the technology truly makes the RN's jobs easier, they'll RUN to the technology.

I'd start first by asking “why” are they nurses too busy to immediately record patient data in existing systems. I'd also analyze the nurses's days to identify waste that can be eliminated (waste is often 60-70% of their time) AND ask the nurses how to improve their processes.

There are plenty of obstacles to deploying such tools, including hospital budget woes, said Marc Holland, research director at Health Industry Insights, a unit of research firm IDC. But the new tablet seems unusually attractive, he added, and comes as the Bush administration is pressing the medical industry to become more efficient.

Fancy laptops alone won't solve the hospital's problems. Lean is much cheaper to deploy and might actually solve the problem better.