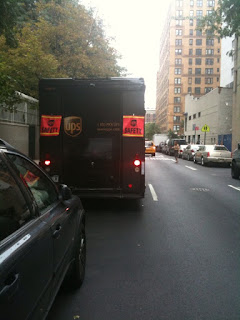 I took this picture of a UPS truck recently in NYC. (The orange signs say “SAFETY.”) At first I thought, “Great! UPS management cares about safety for its drivers. Terrific!”

But then I looked at the signs a bit longer and wondered just what exactly they're supposed to mean. Is it an exhortation to the drivers to be safe when they're on deliveries — in other words, this is just a reminder? Or is it directed to drivers of nearby cars, warning them to be careful when passing the UPS truck? Or is it both?

Mark has written often about the prevalence of signs encouraging hand washing in hospitals, and about the very low level of adherence to this policy. As he points out, signs and admonishment just don't work, which has led to discussions about “error-proofing” hand washing.

It would be far better for UPS to provide traffic cones or some other control device to create a safe zone next to the truck. The cones would ensure that the driver has room to operate, rather than simply hoping that people will read — and respond — to a simple slogan like “Safety.”

And, in fact, UPS does provide each truck with two cones. So why aren't they out there? I went to the gemba to find out. (In other words, I talked to a few drivers.)

It turns out that drivers love the cones. They were introduced a couple of years ago, after a UPS driver had his leg crushed against the back of the truck by a car and needed to have it reattached surgically. But they've run into two problems. First, some people steal the cones. Second, cars (in NYC, at least) don't give the cones a wide-enough berth: they run over them and drag them away.

Getting UPS headquarters to replace the cones is a long, slow, bureaucratic process filled with numerous forms and delays. It's a constant source of frustration for drivers. But since they're paid to make deliveries, they do they best they can with the orange “SAFETY” signs — even if it's not as safe as it could be. So much for respect for people.

It seems to me that UPS has a fantastic “kaizen” opportunity here. They can either streamline the cone replacement process, or employ their thousands of drivers to figure out a solution to the root cause of the problem. Surely someone can come up with a way to keep the cones from disappearing — and to keep the drivers safe.

He is a faculty member at the Lean Enterprise Institute and teaches at the Stanford University Continuing Studies Program. He also lectures on A3 thinking at the Ohio State University’s Fisher School of Business.

Dan is a frequent speaker and presenter at conferences, and has consulted to organizations as diverse as Camelbak, Clif Bar, Abbott Vascular, WL Gore & Associates, Intel, the City of Menlo Park, and Memorial Sloan-Kettering Cancer Center.

His book, A Factory of One, was honored with a Shingo Research Award in 2013.

Dan has also published articles in the Harvard Business Review blog, Quality Progress, Industry Week magazine, Reliable Plant magazine, and Management Services Journal, among other magazines. All of these articles are available for download on the Resources page.

Earlier in his career, he held management positions in product marketing at Sierra Designs, Adidas, CNET and Asics Tiger, where he worked in sales, product marketing, and product development. He also has experience as an entrepreneur, having founded his own skateboarding footwear company.

Dan lived in Japan for four years and is fluent in Japanese.He holds a BA from Wesleyan University and an MBA from the Stanford University Graduate School of Business.

Guest Post: You Don’t Have to be Lean to be Good