By Dan Markovitz On Oct 29, 2009 Last updated May 29, 2014
3
Share FacebookTwitterLinkedinPinterestEmailPrint 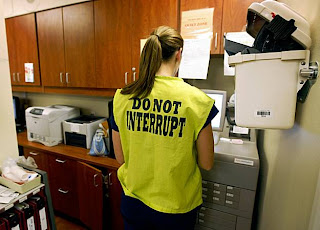 Long-time readers of this blog (and my own) know that I focus on bringing lean techniques to individual work habits. One topic I often cover is how interruptions — from email, phone calls, colleagues — creates inefficiency and waste for office workers. I suspect that readers sometimes think that this is a pretty minor issue — that “real lean” addresses more significant things, like defective parts coming out of a grinding shop.

Now comes a report from the University of California at San Francisco that interruptions aren't just minor annoyances that make people a little less efficient. They cost money and lives.

A study involving nine San Francisco Bay Area hospitals focused on improving accuracy in administering drugs – with particular emphasis on reducing interruptions that often lead to mistakes – resulted in a nearly 88 percent drop in errors over 36 months at those hospitals.

“Medication errors make up the largest slice of the medical error pie,” said Julie Kliger, director of UCSF's Integrated Nurse Leadership Program, which developed the medication errors program. “Improving these numbers is a huge benefit to patient safety and, secondarily, it reduces costs.”

Lest you think this is just a minor issue, the Institute of Medicine estimates that errors in administering medication cause about 400,000 preventable injuries in hospitals and about $3.5 billion in extra medical costs each year.

What's most exciting about the study is the way they reduced those errors. In true lean fashion, front line workers — nurses — figured out ways to improve the current state without spending money. No fancy jargon, no value stream maps — just common sense and a desire to fix a problem.

Striving to reduce interruptions that lead to mistakes, teams of nurses at the different hospitals came up with a variety of methods – often surprisingly low tech – to alert others they were administering medications. The strategies included everything from wearing brightly colored vests or sashes to establishing “quiet zones” or making announcements at key points in the day when medications are being administered.

At San Francisco General, for example, nurses found they were constantly being interrupted in the medication room because their colleagues could see them through the windows. So they covered the windows.

The solutions “have to be low tech because we, as staff nurses, don't have the money or ability to make high-tech changes,” said Celeste Arbis, a registered nurse in the medical-surgical unit there. “Something as simple as changing the process just a little bit can make a big difference.”

Much of the program's success came from allowing the nurses on the floor to develop their own countermeasures. Kaiser nurses used fluorescent sashes to signal they were in the middle of giving a patient medications and conducting necessary safety checks. But

at St. Rose Hospital in Hayward, for example, nurses in the maternity wards found the sashes too flimsy and opted instead to use bright green vests. In the large medical-surgical units, nurses rejected the vests and sashes in favor of carrying yellow folders. In the hospital's intensive care unit, nurses put a border on the floor around the electronic medication dispensing machine along with an overhead sign.

Mark has been preaching for awhile now about the false dichotomy presented in the media between better health care and lower costs. This is just another example of the waste that is both easy and inexpensive to eliminate, and would improve quality AND lower costs.

Dan Markovitz is president of Markovitz Consulting, a firm that radically improves operational speed and efficiency by applying lean concepts to knowledge work. He is a faculty member at the Lean Enterprise Institute and teaches at the Stanford University Continuing Studies Program. He also lectures on A3 thinking at the Ohio State University’s Fisher School of Business. Dan is a frequent speaker and presenter at conferences, and has consulted to organizations as diverse as Camelbak, Clif Bar, Abbott Vascular, WL Gore & Associates, Intel, the City of Menlo Park, and Memorial Sloan-Kettering Cancer Center. His book, A Factory of One, was honored with a Shingo Research Award in 2013. Dan has also published articles in the Harvard Business Review blog, Quality Progress, Industry Week magazine, Reliable Plant magazine, and Management Services Journal, among other magazines. All of these articles are available for download on the Resources page. Earlier in his career, he held management positions in product marketing at Sierra Designs, Adidas, CNET and Asics Tiger, where he worked in sales, product marketing, and product development. He also has experience as an entrepreneur, having founded his own skateboarding footwear company. Dan lived in Japan for four years and is fluent in Japanese. He holds a BA from Wesleyan University and an MBA from the Stanford University Graduate School of Business.

Quote from Seth Godin on the Scientific Method

Womack & Jones at the Gemba: “Spread” and Innovation

Guest Post: You Don’t Have to be Lean to be Good