It's unfortunate that NPR's “Wait, Wait, Don't Tell Me” show would mock Starbucks and their Lean efforts, as had been somewhat half-documented in the WSJ (and discussed here on this blog). But, I had to admit I chuckled and laughed at the audio that I linked to up top.

They start discussing Starbucks and their use of Mr. Potato Head about two minutes into the clip. The NPR folks took the Mr. Potato Head exercise very literally and someone asked basically, “If they want to do a better job of making coffee drinks, why not practice making coffee????”

The point of exercises like these aren't to develop manual dexterity or anything directly transferable to the actual work itself. It's about demonstrating how a process that “can't be improved upon” (in the minds of staff) can actually be improved if you get creative in your approach to solving problems. I'm sure the Mr. Potato Head exercise is all about developing their brains, not their arms and hands.

There were also some funny quips in the NPR show about making a latte with a foam mustache or a hat… funny.

If you're going to not understand why Starbucks is using Mr. Potato Head (as an eye-opening “what is possible” exercise), you might as well be funny about it, unlike the Gawker blog was with their misguided attempt to claim that Starbucks was turning people into robots.

Like I said in my previous posts, it seems that Starbucks is getting a bad rap through the WSJ's choice of reporting what seems to be just part of their Lean journey. It's amazing, in a way, that it's been a long while since I've an article about “those kooky hospital people are trying to be like Toyota” story. The reaction from the Starbucks Lean efforts tells us we have a lot of educating left to do. Again, I'll point you to John Shook's blog post about Lean and people at Starbucks and what the WSJ missed. 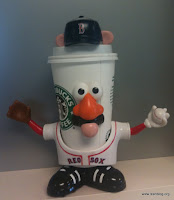 So, in a spirit of admiration for Starbucks' attempts (not in mockery), I have a new mascot at my desk… my morning Starbucks cup turned into a Boston Red Sox Potato Head. He needs a name. Any suggestions?

In a way, he's my reminder that even the most well-intended Lean efforts and culture changes are going to see “weird” to a large part of the general public. This could happen to any of us who aren't working directly in auto parts manufacturing – our Lean efforts could be misperceived by a public who doesn't “think Lean.”

So back to the Potato Head training exercise. I see value in that, done the right way. Do you use similar training exercises like Mr. Potato Head? Stuffing envelopes? Legos? Paper airplanes? How do you find that helpful or effective? If you have an example to share, click the Comments link below the post