Interesting story last month about Ford and CEO Alan Mulally. He's a Toyota admirer and Lean devotee' from his time at Boeing. FORTUNE magazine was allowed to share a diagram that Mulally drew up before the interviews. Click on it for a larger view (I couldn't find it online, so I scanned it)… interesting that Lean/Ford Production System isn't there in the company strategy. 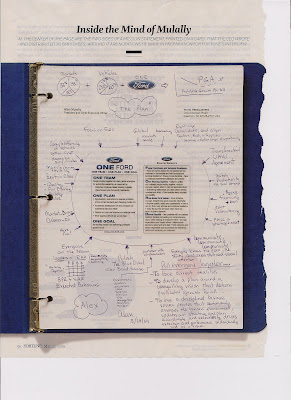 The piece by Alex Taylor III is very interesting — he might be the best auto industry writer around.

I've heard a similar story about Mulally being new to the Ford culture and having to create a climate of openness — a “no problems is a problem” culture as the Toyota expression goes:

Mulally instituted color coding for reports: green for good, yellow for caution, red for problems. Managers coded their operations green at the first couple of meetings to show how well they were doing, but Mulally called them on it. “You guys, you know we lost a few billion dollars last year,” he told the group. “Is there anything that's not going well?” After that the process loosened up. Americas boss Mark Fields went first. He admitted that the Ford Edge, due to arrive at dealers, had some technical problems with the rear lift gate and wasn't ready for the start of production. “The whole place was deathly silent,” says Mulally. “Then I clapped, and I said, ‘Mark, I really appreciate that clear visibility.' And the next week the entire set of charts were all rainbows.”

Mulally appreciated the honesty, rather than wanting Fields to hide the truth. Seems like a good start.

The one thing that rubs me about wrong is the “me me me” orientation that Mulally seemed to have in preparation for the interview. He prepared a one-page guide, for the writer's benefit, to his own leadership style and characteristics? Mulally's here to save the company? (this all comes out in the FORTUNE piece).

Does that seem a bit self-absorbed to be a truly effective leader?

It Might Be Bad Design If Instructions Are Required…

20+ Years Ago at GM: The Quality Death Spiral of Bad Management & Blaming…