Following up on Part 1 of the survey results, we'll now explore some of the results and lessons learned from event-driven Lean activities in hospitals and health systems (done under names such as Kaizen Events, Rapid Process Improvement Workshops, and Rapid Improvement Events).

Question 4 asked: How many events has your hospital or health system completed?

Most answered specified that the response was for a single hospital, so all data were combined into a single histogram, shown below: 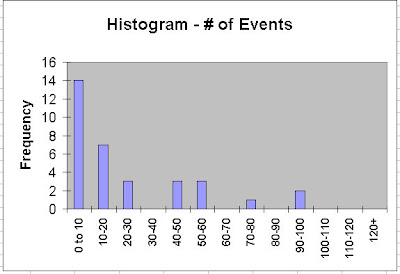 The highest response was “100+” kaizen events for a hospital that has been implementing Lean since 2004, so that's roughly 20-25 events a year, which is not an unreasonable pace if you have a few facilitators. That particular hospital also reports using other Lean methods beyond week-long events.

Another hospital that reported 75 events has completed those in two years of Lean implementation. The most aggressive pace was a hospital that stated their goal was implementing 48 events per year. If you have enough facilitators, given the number of value streams and departments in a hospital, it's reasonable to think you could do 48 in a year. I know when I was facilitating events in manufacturing, having more than one a month was difficult if you were going to do enough prep and follow up activity. It's not just the event itself that's time consuming. If you read about the Virginia Mason Medical Center event methodology (that's discussed in my book), there are multiple weeks of planning, training, and data collection before the actual event.

Another hospital stated they did 60 events in 2007 (and didn't say anything about 2008). I wonder what happened? Did they stop doing events? They reported a 50% sustainment rate, so it doesn't sound like the events were a total failure…

Question 5 asked: What percentage of events have a significant impact initially?

Question 6 asked: What percentage of events have SUSTAINED results (i.e., no significant backslide, no need to repeat event)?

The results are shown in the table, below:

The results show that it is more difficult to sustain improvements — something that we probably would have intuitively predicted.

11 out of 33 respondents claimed an initial 100% success rate and 7 out of 33 claimed 100% sustainment success. The low end of scale included one respondent who stated 0.5% (I don't think I misinterpreted this, as they typed in a percentage, I don't think they meant 0.5=50%). I'll post the full response set in the post comments. A few respondents said “it's too early to tell” about their sustainment success, as they are very early into their Lean journey.

If you have any questions about the survey results, please post them in the comments section below…

There were many interesting “lessons learned” comments. I'm going to organize those and save them for a third and final blog post on the survey.