LAME: Lean is Not Automation

Here's another example of what you might call “L.A.M.E” (“Lean” As Misguidedly Executed) instead of “Lean.”

I received a disturbing report in my email inbox two weeks ago, a report that tries to co-opt Lean and the Toyota Production System to support what might be some very non-Lean ideas. The report, published by a healthcare industry group called the “The Advisory Board Company,” puts its agenda right in the title of the report, at least:

I work with a lot of hospital labs, helping them implement Lean. Many hospital labs are seduced by the promises of automation, a “siren song” if you will. This should sound familiar to the manufacturing folks reading this. Whether it's robotics or software, a lot of money is wasted each year on technology and automation that fails to deliver on its cost savings promises.

Many hospital labs see a choice between automation and Lean (as factories do). That's a false choice, but it's especially painful to see hospitals spending money to automate a bad process. For example, if a hospital lab layout is poorly designed, instruments might be put in locations where space was available, rather than considering the flow of test specimens and employees. If a high-volume test instrument is located a long distance from the receiving area, many companies would be happy to sell you automation to carry the specimens instead of having a person carry them. The Lean solution would consider changing the layout so that the “waste of transportation” is eliminated or minimized, rather than just automating it.

So the “Automating the Lab” article starts with this header on the first page:

“Re-creating the Laboratory in the Image of Toyota.”

Ok, this is interesting, I thought. I thought this was an article about automation, but they're immediately invoking Toyota. But Toyota's success isn't due to automation. Toyota's success is arguably the result of its people… its culture of respecting people, investing in their growth, and encouraging (or demanding!) continuous improvement. Pushing “automation” as Lean might more accurately be described as “LAME” (“Lean As Misguidedly Executed”).

The article takes a horribly wrong direction on this first page when it states:

“However, as health care professionals increasingly turn to other industries such as auto manufacturing for ideas on process improvement, the lab has emerged as the perfect assembly line model to revolutionize using LEAN Toyota principles and Six-Sigma concepts. Taking the concept of streamlining workflow one step further, many hospital leaders are embracing (and investing significant capital in) the totally automated, human-free laboratory system.”

Whoa, whoa, whoa! Since when was Toyota's goal a “totally automated, human-free” factory??? That was GM CEO Roger Smith's goal in the 1980's, the “lights out factory” (that didn't pan out, did it??).

The article continues to talk about automation that ties together the receiving area and test instruments. The header of a diagram (click for larger view) says: 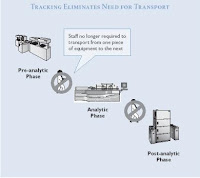 WRONG. An automated track (like a conveyor) only automates the waste. This is a false efficiency gain, especially when the lab automation can cost hundreds of thousands of dollars (or even over a million dollars!). Lean is very inexpensive to implement, even if you include the cost of an initial consultant (Yes, I'm a consultant – if you want to write an “anti-consultant” piece on your own blog, go right ahead, I'll even link to it).

The article does point out a lean notion, that you shouldn't immediately cut employees, that you should allow them “scale back their staff levels gradually through attrition.” But if the goal of automation is cutting headcount, how many hospital administrators are going to get that message? Sure, Lean can reduce your headcount requirements, but Lean also leads to improvements in areas other than labor cost – safety, quality, and lead time, to name a few.

So why aren't lab employees going bonkers for automation? One reason for “staff resistance” is stated as:

“… staff may perceive automation as the hospital's attempt to replace staff with robotic equipment.”

Do ya think? When the stated goal on page one is “a human-free laboratory,” the staff is only “perceiving” that the hospital doesn't value them? Where would they get that idea?

It is true that there is a shortage of Medical Technologists in the lab world. Automating might be a strategy for coping with shortages of skilled people. But putting it that way is completely different than saying you have a goal of a “nearly human-free lab.” That makes it sound like you WANT to get rid of people, rather than coping with a shortage of them.

I'm not opposed to automation. But, as the Toyota Way states, you want to use technology to “support your people” (to reduce safety or ergonomic risks, or to improve quality) rather than replacing them. Use automation to relieve people of mundate, thoughtless, or routine tasks, maybe, so they can focus on higher-level value-added activities that support the patients and medical staff. Realizing that employees are valuable, because they learn new skills and drive continuous improvement is lean. It's not lean to look to automation as a way to driving out your “costs,” viewing people as a cost instead of as an asset.

It makes me really angry to see people saying it's “lean” to automate away your people. That's “LAME”. I assume it would make Toyota mad as well to see their name used that way.

Question to Readers: Where should I go to learn supply chain management?