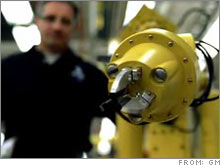 For different reasons than the reasons why I didn't like the ad, but groups are attacking the “suicidal robot” ad for being insensitive.

I still can't believe that GM couldn't find a better way to illustrate their “obsession with quality.”

It's GM's right to run a stupid, ill-conceived ad that doesn't illustrate true quality. Asking them to stop running the ad isn't an infringement on the 1st Amendment if it's private citizens asking them to stop. It's in poor taste for the suicide prevention group to ask GM for a donation, though.

Bob Lutz on Tesla, Threats, & Communication About Quality – and…