Here is a story from David Meier, a former Group Leader at Toyota and the co-author of The Toyota Way Fieldbook and the upcoming Toyota Talent

He writes:
I am sure you have experienced the problem of how to attach kanban to cardboard boxes. We did not have too many cardboard boxes at Toyota so for the few we had it was not a big deal. We used bungee cord or rubber bands or slipped the kanban under the flaps.

In other companies there are many more boxes and it is a big challenge. A company I work with had a great idea. It started with one guy walking around Wal-Mart one night looking for an answer to this dilemma. He finally realized that a wood screw poked through the boxes would work so he experimented with it. It worked pretty well, but then there was a screw dangling from the kanban when not on the box.

Some time later another guy (his nick-name is Skinny) was working with the materials guy (nick-named Moose- I am not kidding those are their nicknames and I don't know their real names) and Skinny relied on his previous experience in retail to develop an idea for the kanban. He suggested using one of those devices used to attach plastic tags to garments to attach kanban to boxes. 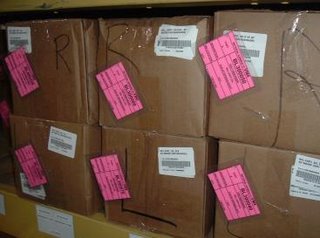 They bought a heavy-duty hand-held tag gun and gave it a try. As you can see from the photos it works great. This is one of the cleverest ideas that I have seen lately and since you are the king of kanban I thought you might like to spread a good idea. (Click on the pictures for larger views) 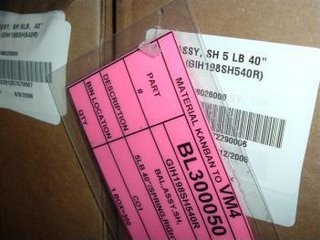 The company is MI Windows and Doors in Gratz, PA and the guys are coming up with some great ideas that I wanted to share. They bought the tag gun from ULINE at the link below. Make sure to but the heavy-duty needles. They are also looking at the unit that holds 1000 tags but I told that was over-production.

Here is a link for the gun.

Lean is the Norm??