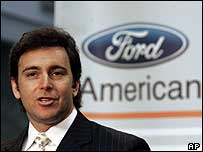 So we've been reading all year about Mark Fields, who has the best executive mullet (a.ka. “hockey hair“) I've seen in some time, and his “Way Forward” plan for saving Ford.

From a marketing standpoint, Ford has been shamelessly waving the flag while simultaneously wrapping themselves in it (quite a feat, it defies physics). Fields says:

And Toyota has scored points by investing in the U.S. But that doesn't make it an American brand.”

Toyota is “scoring points?” Toyota is desperate? It seems like it's been a good business move opening plants here in the U.S. Toyota, thanks to its Toyota Production System, has been wildly profitable building cars here. They eliminate waste from the system to reduce costs and are able to pay UAW-level wages while making huge profits.

Ford is the one seeming desperate in saying, “Buy our cars because we're American, Red White and Blue, Woo-Hoo!” Forget features, styling, price, quality, and reliability. We're the most American, buy from us! We're not a manufacturing company anymore, we're a brand.

The Oakland Press, a Detroit-area newspaper, reported this week details from a document outlining a plan suggesting Ford and its suppliers could invest as much as $9.2 billion in Mexico and create as many as 150,000 jobs there. Ford officials have acknowledged the document appears to be real but have declined further comment. Among its details are deadlines for key tasks and Ford executives responsible for them. Yesterday, the Detroit Free Press posted the document on its Web site.

Here's a direct link to the “secret” documents.

#1 on Ford's list of Mexico “advantages” is “Low Labor Cost.” To me, that proves that Ford doesn't really buy into lean thinking. Why isn't Toyota shipping cars from Mexico into the U.S. if that's such an obviously good thing to do? Competitive manufacturing isn't a battle over who's labor costs are cheapest. It's about building the right products, at the right quality, and the right overall cost. It's very apparent that US workers can be profitable and build good cars, just maybe not under Ford management.

“Our Way Forward starts with a sharp customer focus as the foundation for everything we do, where innovation will be the compass that would guide our future.”

It sounds like the Way Forward is really the “Way South” — as the way to chase cheap labor. Every minute Ford spends looking at low labor costs and debating when the optimal announcement timing is for the Mexican government (there is a whole slide on this in the Free Press documents) is time they're NOT spending thinking about customers. It's clear that the Way Forward is not about customers. It's business as usual, as done by mass production companies. If Ford had ZERO labor cost, they would still be pretty damn inefficient and would still have cars (like the Five Hundred) that people don't want to buy.

It also seems like Ford is playing the old “whipsawing” game. Mexico is offering incentives to build the plant, so Ford runs to the U.S. government what they'll pay to keep Ford here (see this article). Sigh, I guess that's just how business is done. Companies like Dell and Toyota play states against each other, why not play countries against each other?

While Ford tackles its problems, “it's just as important that our partners in government work with us to ensure an even playing field as we compete with our automotive rivals from around the world,” Fields said.

Ford has a right to move so much production to Mexico. I'd just think they lose their right to wave the stars and stripes and to beat their chests as an “American” company. They're a global company, just as much as Toyota and the others. Just admit as much and build cars that people want to buy.

20+ Years Ago at GM: The Quality Death Spiral of Bad Management & Blaming…