Today's guest post is from Ankit Patel, who started his own blog and has been active on Twitter. Welcome to the Lean blogosphere, Ankit.

It's About People, by Ankit Patel:

Like many of you I first learned lean on the job in a manufacturing setting. Some of us have applied to areas outside manufacturing with pretty good success but there are things where it just seems like it's not sticking with the people.

So how do you convey the message to your audience? What I've seen work pretty well is using the DISC system to communicate to people why it's so important to make changes.

Just a quick review below is the DISC personality system. Typically people fall into 1 maybe 2 categories as their dominant traits. 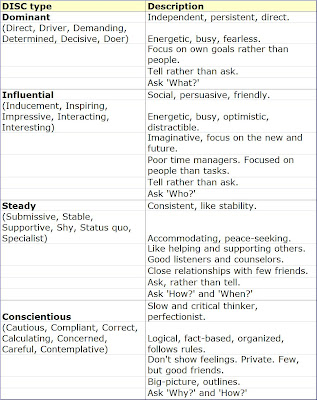 First off how do you know what category someone falls into? I've used it enough to where you get a feel for someone after about 5-15 minutes of talking with them but you can always find free tests online. 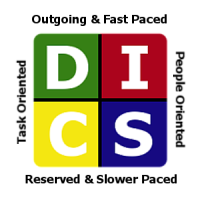 I was once trying to convince a call center in a company that they needed to reduce waste using lean principles. Good news was that lean was being done at the company and there had been some great successes. Bad news was that it had the stigma of being just a “manufacturing thing.” The very first thing I did coming into the call center was to be very direct and very task oriented. I assumed that most were D's and S's because in the manufacturing setting that's usually the people you get.

Without getting into too many details let's just say it was like pushing a wet noodle on a sticky floor. I decided to step back and review what was going on and saw that my communication style was way off for my audience. Can you guess what profiles dominated my audience? Yup I's and S's and some C's with very few D's.

What I found that worked best with the people in the call center was to tell them stories about lean and how it helped. I told them about how we had people running themselves ragged fire constantly fighting issues. When we implemented standard work those same folks felt like “the 3000 lb ball they were carrying was lifted off their shoulders.” I told how the team members were happier after lean because they felt like they had a stake in what was being done. I would even bring in some of the manufacturing folks and have them do a testimonial. We had an office worker, a line worker, and a manager but the people were all the I and S profile. Because unlike magnets, with people like attracts like.

Once the initial hump was tackled then we could get down to business with the details, but if it hadn't been for the shift in communication style we wouldn't have been able to help the call center as quickly as we did. I'd love to hear some of your stories on how you've used different communication styles with different personality types. 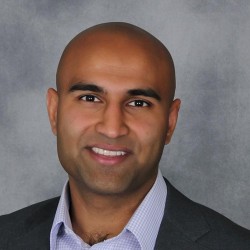 With his primary focus on companies between $1 million and $100 million in revenue, Ankit has worked with companies in a wide spectrum of industries from high tech to healthcare.