Lean Guy Drove a Prius For Two Years And…

By Mark Graban On Jul 7, 2009
7
Share FacebookTwitterLinkedinPinterestEmailPrint
… I wasn't impressed in the least. In my previous role as a consultant, I was given a company vehicle to use, even though it was basically for commuting to a local client, the airport, and occasional personal use.
I had the Prius just over two years and put about 12,000 miles on it. The driving experience was OK (it was peppy enough, I suppose) and it did get 41 MPG. But, aside from being ugly (which is a matter of taste), I was left with some pretty poor impressions of Toyota quality.
This is hard to stomach to a “Lean guy” who preaches the gospel that the Toyota Production System leads to better quality.
My impression was that, to keep the total price of the Prius low (since price is driven by the market, as Toyota teaches), they had to “get cheap” with components that we're part of the expensive hybrid drive system. Toyota couldn't just add cost (hybrid drive) and then try to pass that cost along in “cost plus” pricing. Toyota customers wouldn't buy the Prius at a significantly higher price (or at least not enough, Toyota must have figured).
The interior just felt cheap… the components, materials, and construction.
I wore a hold in the carpeted floor mat and I don't have particularly pointy heels… I drive with my heel in the same position, rotating my foot over to the accelerator. I have a Saab with 40,000 miles and the carpeted floor mat is just fine. The Toyota mat is pictured below: 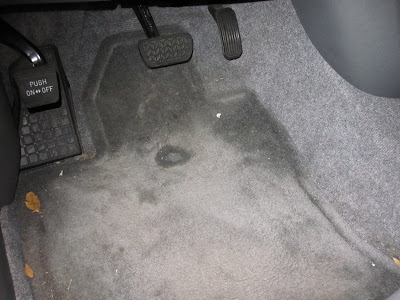 OK, but a floor mat could be replaced easily (and probably under warranty). The driver's seat cloth was pretty worn and cruddy looking, if that is conveyed in the picture: 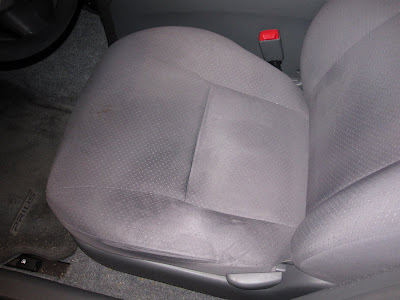 Fumbling with a GPS unit that I was unsticking from the windshield, it fell and, in my fumbling, I struck the clock on the dashboard. It wasn't that hard of a hit, but it must have been in just the right spot to knock the clock into the dash. On it's own, I'd say that was just an unlucky blow, but it got me thinking that maybe Toyota had used cheap fasteners or clips to hold the clock in place. 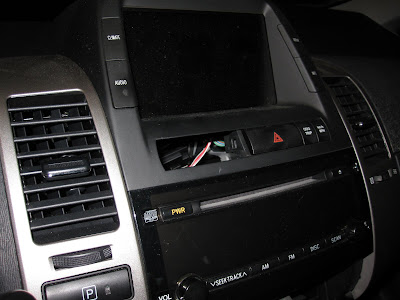 Has anyone else had a similar experience with the the Prius? For many people, the Prius might be their first Toyota. This is supposed to represent Toyota quality? The company that brought us Lexus?

Maybe people are so happy to drive a hybrid car and feel so good about that, so the customers/drivers are willing to forgive and overlook other flaws and cheapness? Is Toyota giving the market the quality they desire at their price they are willing to pay?
I wouldn't spend my own money on a Prius after my experience. What do you think?