By Mark Graban On May 5, 2009 Last updated Feb 26, 2011
2
Share FacebookTwitterLinkedinPinterestEmailPrint

I spent a few days in Puerto Rico back in March visiting a few hospitals and giving a talk at the University of Turabo, south of San Juan. I was honored to speak to an audience that included the Dean and representatives from the Turabo Business School, students, hospital employees and leaders, and some city government officials.

I was warmly received and my talk was written up in the news, with a similar piece online. I've been able to read the automated Google translation, which gives me the gist of it (links removed since they are no longer valid). If anyone is willing to give a real human translation, it would be much appreciated! Click on the photo for a larger image. 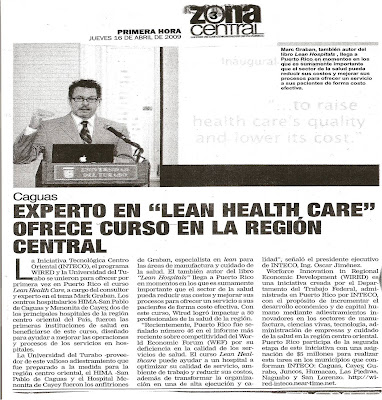 I had a chance to visit two hospitals and meet with employees who were taking an eight-week course in Lean healthcare, a course that used my book as a primary text. That was an honor. I enjoyed discussing their learning and initial projects. I was particularly impressed with the physician leaders who were taking a lead role with pushing Lean improvements for improving patient flow through the Emergency Department and the hospital as a whole.

My hosts were patient with my complete lack of Spanish language skills. Most of the presentations and business were conducted in English, or translated for my behalf. One phrase on a PowerPoint slide jumped out at me, something even I could understand:

Yes, a lack of standardized processes isn't just a problem in the U.S.

I want to thank my hosts Gilberto, Angel, and Marcelino for my first visit to Puerto Rico. I hope to visit again, considering the strong Lean efforts taking place in some of the hospitals there.

Revisiting My Interview of Paul O’Neill, Sr. From 2011