By Mark Graban On May 28, 2009 Last updated Jul 28, 2011
4
Share FacebookTwitterLinkedinPinterestEmailPrint

How the Mighty Fall: A Primer on the Warning Signs – BusinessWeek

Jim Collins, of Good to Great

fame, has a new book out called How The Mighty Fall: And Why Some Companies Never Give In

. Excerpts were printed in a recent BusinessWeek (a magazine that's printed weekly, unlike IndustryWeek, but I digress).

Collins raises some interesting points about how a company's success can breed arrogance or complacency or all sorts of other dysfunctions that can lead to a downfall. One of the difficulties, Collins points out, is that the seeds of the destruction are already planted long before the problem (the fall) is widely recognized or admitted to. A company might have success, although the foundation is crumbling, right up until the point when things fall off a cliff.

Check out the link to the full BW article at the top of the post in case I didn't summarize or paraphrase him accurately.

I didn't see an online link to this table, so I scanned it from the magazine. Click on it for a larger view. 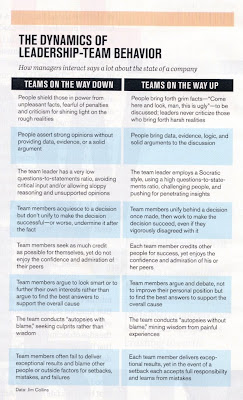 I have a bit of an ongoing series called “Like Lean” where different ideas or practices remind me of Lean and the Toyota Production System even if they aren't called out as Lean. Sometimes, good ideas just germinate in different ways or they just seem like common sense. I think the table above is an example.

If you labeled the left column “Traditional Mass Producers” or “Sloan-ist Management” and the right column “Lean/Toyota Management”, it would still be pretty accurate, I think.

Some of these could also be good “Goofus and Gallant” or “Doofus and Leanie” captions, don't ya think?

Interesting other tidbit about Collins from this NY Times article — he time studies himself and how he allocates his time:

And in a corner of the white board at the end of his long conference room, Mr. Collins keeps this short list:

That, he explains, is a running tally of how he's spending his time, and whether he's sticking to a big goal he set for himself years ago: to spend 50 percent of his workdays on creative pursuits like research and writing books, 30 percent on teaching-related activities, and 20 percent on all the other things he has to do.

These aren't ballpark guesstimates. Mr. Collins, who is 51, keeps a stopwatch with three separate timers in his pocket at all times, stopping and starting them as he switches activities. Then he regularly logs the times into a spreadsheet.

Interesting, I've never heard of anyone doing that…

NPR Does a Great Job of Covering Toyota