I'm in New Orleans, presenting this morning at a medical laboratory industry conference, giving a talk about how Lean isn't just a set of tools or a cost-cutting methodology — it's a management system, a culture, and (maybe most importantly) a way of developing employees and leaders in your organization.

I should probably be writing about that topic… and I'll write a full summary of my presentation for the blog (and will touch on this briefly later in the post), but I had something more important I discovered yesterday when I arrived and had some free time:

I walked to the famous Cafe Du Monde and decided to ruin my dinner by trying their famous beignets that I had only seen on TV.

Here's what was delivered to me, an iced cafe au lait and three beignets covered in powdered sugar. 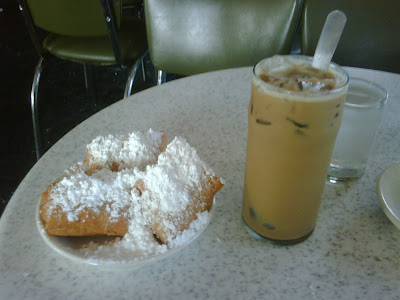 Here's a shot of me stuffing my face: 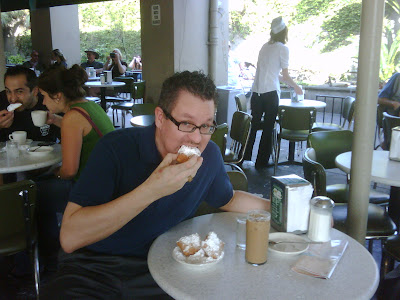 Now I'm not blogging about this to just brag about eating dessert a few hours before dinner.

After the first beignet, my mind started wandering… man, that's a lot of powdered sugar…. it's all over the floor (at first, it looks like bird droppings, unfortunately): 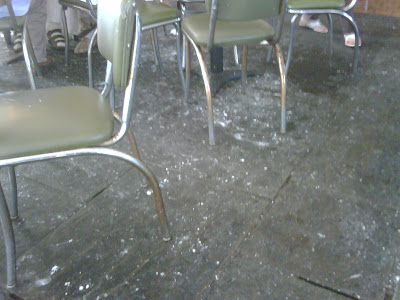 At first, my operational and Lean brain kicked in and I thought, “Wow, when you take a bite, the powdered sugar flies EVERYWHERE. There's way more powdered sugar on there than necessary, that's a waste of money.”

Now I'm normally one to think “Lean applies everywhere” — whether it's a factory, a hospital, or even Starbucks.

But I was taking in the music being played on the street, the tastes, the smells, and the smiles all around me.

I finished off the third beignet (without a tinge of bad-eating guilt) and was left with this pile of powdered sugar — partly because I had knocked a lot of it off, intentionally, to keep my clothes somewhat sugar-free. 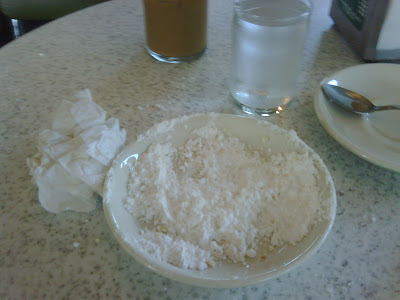 Yes, that extra sugar is probably technically “waste” as we would call it in the Lean world. But, it's part of the whole experience… everyone walks away with the tales of sugar falling all over them… in this context, it's probably “value,” that extra sugar. At least it was to THIS customer.

So in my sugar high, I thought about the presentation for Wednesday morning… hoping to inspire the audience that PEOPLE DEVELOPMENT is at the core of these different Toyota diagrams of their production system for a reason.

Ultimately, the only thing that can distinguish an organization is it's people. In many industries, we can all buy the same equipment and arrange it in the same physical process. When I was at GM Powertrain in the mid '90s, we had the same engine block machining equipment as our competitors, laid out basically the same way… and we had HALF the productivity and worse quality.

This wasn't because GM started with a bunch of dummies, compared to Toyota. Both companies pretty much hired from the same labor pool originally. Toyota people in Kentucky weren't inherently smarter than GM people in Michigan. Toyota developed the problem solving and continuous improvement capabilities of their people, while GM asked people to “check their brain at the door” (either implicitly or explicitly).

I hear the same thing in many hospitals, sadly, that highly skilled employees are told to just do their jobs as they are told instead of participating in process improvement. If your hospital can buy the same equipment, put in spaces designed by the same architects, what is your distinguishing characteristic? Your people.

“Every Toyota team member is empowered with the ability to improve their work environment. This includes everything from quality and safety to the environment and productivity. Improvements and suggestions by team members are the cornerstone of Toyota's success.â€šÃ„Ã¹

More on this to come… but, as many others in the Lean world, I'm convinced that Lean (true Lean, not fake Lean) is a people story… the companies and hospitals that do more to help their people grow and develop will be the winners. Just look at GM (Government Motors) vs. Toyota today, 15 years later….

What does your Lean organization do to develop people? Do you think the extra sugar is waste or value?

Reader Question: Why Do We Still Do It?

Rather than Blaming Employees, Managers Must Take Responsibility for Problems –…

When the Chef Goes and Sees (Well, Tastes) the Problem