Saving Lives and Losing Them 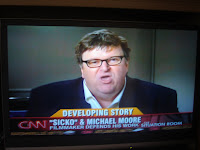 After watching Michael Moore virtually melt down on CNN a few minutes ago, I had some thoughts…

As I wrote about before, there are two problems with healthcare:

The Lean work that I do is focused on quality of care, so I'm somewhat biased to focus on issue #2. Moore, in SiCKO, focused exclusively on issue #1, which I thought was a real wasted opportunity to focus on a bigger killer.

Michael Moore keeps screaming that 18,000 Americans without insurance die each year. That's awful, don't get me wrong. If you take the number as approximately 47,000,000 Americans who don't have insurance, that's a “death rate” of 0.000383.

Basically the same rates. I was stunned when I did the math in Excel. Is it fair to say that IF you were able to get coverage for those 47,000,000, that just as many (116,000) would die because of medical mistakes instead of today's total from 1) lack of insurance and 2) medical mistakes?

OK, that's not exactly right, because the 47,000,000 without insurance DO get treatment, usually through the Emergency Room. That's not the best treatment always, but we won't have two exclusive sample sets to compare.

But, I think my overall point is valid — if we're going to get everybody coverage, we have an obligation to eliminate preventable medical mistakes the same way we've pretty much (knock on wood, I fly tomorrow) eliminated preventable airline disasters. Lean methods — process focus, standardized work, root cause problem solving to name a few — can help solve our quality crisis. Our goal needs to be ZERO preventable deaths, absolutely.

Two somewhat unrelated points that I can't resist commenting on:

1) At the end of the interview, CNN's Wolf Blitzer asked Moore to continue taping a 2nd half of the interview that would air tomorrow. Ironically enough, Moore complained that he would probably be edited and parts of the interview would be left on the cutting room floor to make him look bad. I guess he's familiar with the method…

2) Moore made a huge assertion that doctors would rather see a Medicare patient because they know they'll get a check sent right out instead of fighting “an hour on the phone to get a $15 office visit paid” (with insurance). I've seen medical claims billers fight both private insurance AND the federal government, fighting to get rejected payments overturned. To say the government easily and efficiently ships checks out seems to be another example of fairy-tale land (along with “free” healthcare). As this article points out:

“Increasingly, physicians are being forced to choose between keeping their medical practices financially viable and treating all of the Medicare patients that need their services,” the report said.

Medicare keeps slashing payments, which is, in a different way, limiting access to care. But, I don't recall Moore addressing that problem either.

Thanks to our Sponsors