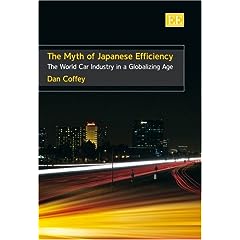 A new book is out attacking Lean. Or maybe the book is actually attacking “L.A.M.E.”, or “Lean as Misguidedly Executed” at Rover. This is Rover, the car company that failed and went out of business in 2005 after earlier being taken over by BMW. This is not the Range Rover brand, that was purchased by Ford from Rover previously. Ford also then bought the Rover name and intellectual property after their failure. It sounds like the company had a number of long-standing marketing and quality problems in their attempts to compete with Jaguar, BMW, Mercedes, and the like.

The book, The Myth of Japanese Efficiency by Dan Coffey, says the “just-in-time” supply system at Rover destroyed its manufacturing flexibility, increased its production costs, and fueled hostility within its factories towards its marketing plans. Its publication will reopen the debate over the collapse of Rover just as car production resumes at its Longbridge factory under Chinese ownership.

The findings are based on the author's extensive field research including independent and detailed participative research carried out within Rover Group itself.

The researcher did “extensive” research within the Rover Group. Does that mean this book is helpful only for those within Rover? Or is there something transferable to those outside?

Without reading the book (it's $100, so it's not a high priority purchase for me), it's hard to see what conclusions the authors are drawing. Is it a problem with HOW Lean was implemented at Rover or does it highlight problems inherent to Lean?

I'd guess it's the former (HOW “lean” was implemented). Too many of us have had first hand experience with successful Lean implementations to want to blame Lean for Rover's problems. We also know that Lean Failures are far too common, even the most vocal Lean proponents (such as Jeff Liker) will admit that.

The book isn't just trying to point out what went wrong at Rover, they are trying to expose a “myth” of Lean production. It's hard to understand how somebody can take something very visible and call it a myth. Toyota is measurably more successful than the rest of the automakers, including the Detroit Three. Toyota does things measurably different and manages people in a different way. This is a “myth?”

The book will force academics to review the findings of the 1989 Massachusetts Institute of Technology (MIT) survey of the global car industry, which gave birth in the first instance to the notion of ‘lean production'.

The MIT survey found Japanese plants enjoyed much higher labour productivity advantages than could be explained by investment in automation.

Dr Coffey shows the methodology for this revered research project was flawed both because of how the data was interpreted statistically and because it omitted overtime work in the index of labour used.

As a real-world Lean practitioner, I could honestly care less that “academics” might have to re-think Lean. The Lean cow is out of the barn, it's been proven in the real world.

I emailed Jim Womack and asked him about this book. Jim had heard of the book, but didn't know any details about the case it was making. I then asked Jim about the claim of omitting overtime data and I haven't heard back from him yet.

As Japanese imports made significant in-roads into Western markets in the 1970s and 1980s, this was more easily explained by finding a fictional manufacturing revolution.

This really makes me wonder if the researchers visited Toyota, to compare Rover and Toyota, or if they visited any sites of Lean success stories. This is not a “fictional” revolution. That sounds like the excuse-making talk of people who failed in their lean implementation and the researchers who parroted their claims.

The book has received praise from academic experts from across the world. Writing from the world-leading Stanford University in the US, Professor Sarah S. Lochlann Jain describes the book as “of exceedingly high calibre” and predicts it will make a “critical contribution to the literature on the automobile industry”.

The book's table of contents includes:

Fair and balanced? If someone has $100 to throw around and wants to read this book, please report back to us.

Just as Bad in Canada

Steel Toes and Stilettos, an Interview with Kathy Miller and Shannon Karels

Get Paul O’Neill’s “Playbook for Habitual Excellence” for…