Hiding Defects in the Ceiling 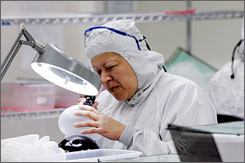 First off, shame on the journalist for using the “everything is bigger in Texas” cliche in her story. About my headline… yes, that's not referenced in the USA Today, but read on…

This article wasn't about lean and I wouldn't have any idea if Mentor Corp uses lean methods. The factory is probably within about 10 miles of my home, so I wonder if I could find out.

Two things jumped out at me in this article: One was the focus on quality through inspection. First off, since breast implants are a medical device, they are highly regulated and the impact of bad quality could be very serious (you don't want a leaking implant, whether its silicone or saline). Inspection can be an important tool for protecting your customer from defects. But, as they say 100% inspection isn't 100% perfect. People get tired, they miss things…. we are human, after all.

I would hope that Mentor also has a robust continuous improvement program of some sorts. When they find a defect, what do they do? Do they toss that one and move on to inspecting the next one? Or, do they drive feedback upstream for problem solving at the point of production or at the supplier? When they find a defect, can they identify the root cause and eliminate that particular defect from happening again?

To have an effective quality feedback loop, you want minimal delay between production and inspection. Ideally, you would make one, then inspect one, so if you found a problem you could stop production to investigate. When production happens in large batches and inspection happens a long way from production, there are delays. By the time you find a problem, you've probably cranked out more bad product (or you have the waste and extra motion involved in searching for more possible defects before starting up production again).

Again, I'm pretty much speculating on a factory I've never seen, but the article said:

Now, breast implants don't have to sit and rise like pizza dough. That rising time would probably be considered a “value added” time in a pizza dough value stream. In the Mentor factory, those trays and racks represent batches and “work in process” inventory. Not a good sign. That's not “value added” time, when inventory is just sitting and waiting. Batches mean longer cycle times, more inventory, and usually mean more quality problems.

I would hope that, from a quality standpoint, they are working to reduce their batching and the non-value added time (waiting time) in their process.

What is Mentor's Track Record?

Doing a quick google search for Mentor and quality, one of the first articles that comes up isn't very encouraging (all of this via the NY Times and some lawsuits that were filed):

John C. Karjanis, the former product evaluation manager for Mentor, stated under oath that “top executives instructed him to destroy reports detailing the high rupture rates and poor quality of some types of implants because the products ‘are in the customers.'” Karjanis also stated that one Mentor manufacturing executive attempted to obtain approval of defective products through fraudulent documents. When confronted by Karjanis, the executive admitted to trying to get one past him.

Moreover, Karjanis stated that Mentor “suppressed a report finding that some implant models had a high failure rate,” and that factory workers also hid defective products in the ceiling tiles in an effort to conceal how often the plant failed to make the products properly… shockingly, Mentor's implant packaging was sometimes infested with fleas, which came in contact with the implants' surface.

Before we go blaming the “factory workers”, maybe that sentence could have also read “Under pressure from management, factory workers felt like they would be punished for discovering defects, so they resorted to hiding them.” You might call me cynical, but I bet that's what happened. Unfortunately, their quality feedback loop involved hiding defects….. ARGH.

Mr. Karjanis said that while he was at Mentor, some manufacturing executives made efforts “to get an acceptable disposition of materials through fraudulent means.” In one example, an operations manager tried to get him to approve implant parts that had been poorly made.

“In reviewing the documentation, I found that the documents had been falsified,” Mr. Karjanis said. “And in confronting him and asking him to come back to my office, I remember his literal statement was, ‘I almost got it past you.' “

I'm sure that operations manager was under pressure to make the numbers too. Is stuff like this the workers' fault, the operation manager's fault? I guess that's why it comes back to top management, how they manage and the tone they set. If you have a “make the numbers at all costs” mentality, people will do a lot of stupid things.

Sounds like Mentor really could use Lean…. not just lean production, but the right kind of Lean Management, as well. I guess after this I'm not getting invited to their factory then! Apparently the “boobs” are the people running Mentor.

Nice Mention of Some Lean Blogs