A tale of two factories – China and U.S. 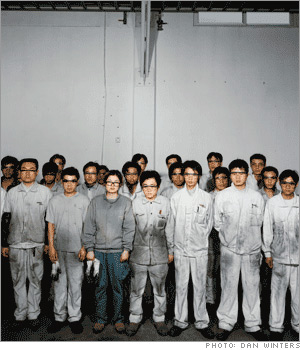 A tale of two factories – FORTUNE

Here is an interesting piece from the latest FORTUNE magazine. The reporter visited two Tenneco Automotive plants that both make mufflers — one in Litchfield, Michigan (my home state) and one in China.

I'm happy that this article, which is read more widely by MBA types (of which I'm one) than lean folks (of which I'm more proud of being). If the article gets only this point across, it is valuable:

“Consider: At Tenneco's plant in Shanghai, labor represents just 1% of production costs; at its Michigan plant the figure is 12%. It is Michigan, however, that wins hands-down in terms of profit, reporting gross operating margins that are a third higher. The death of U.S. manufacturing has been greatly exaggerated.”

See, cheap labor isn't everything. The Michigan plant is more profitable. The article talks about some of the problems with manufacturing in China. It hardly sounds like a “lean” environment. Hardly a humane environment!

“Sparsely automated and a little grubby, Tenneco's Shanghai factory resembles a large barn with an attached warehouse that, open on one side, is little more than a shed. The place is clean but scuffed around the edges. The workers' white cotton jumpsuits look as if they are cleaned about as often as a car owner changes the oil.

In winter the only heat is in individual offices; in summer rolling electrical blackouts are common. The plant employs 275 people in two eight-hour shifts; they produce about 400,000 exhaust systems a year. Machinery is scarce. Though wages are going up 10% a year, labor is still cheap. Blue-collar workers make $210 to $250 for 160 hours of work a month. White-collar workers like engineers start at $625 a month. Profits, says Tenneco, are “average” in a competitive market.

The Shanghai workers appear engaged, but concepts like self-directed teams and even safety – workers have to be prodded to wear protective glasses, steel-toed shoes, and earplugs – have been slow to arrive. Making improvements is difficult; many workers, used to working for state-owned Shanghai Automotive, are ferociously resistant to change. Relationships with supervisors are often testy, with neither side much interested in diplomacy.”

One thing that stood out — the idea of Chinese workers being “ferociously resistant to change.” I've been guilty of having the stereotype view (one that's wrong apparently), that Chinese workers, being part of a totalitarian Communist system, would be extremely subservient and cooperative. Human nature is human nature, though?

If Chinese plants have poor safety and environments that sound like mid 20th century U.S. manufacturing, will they improve this or only have “cheap labor” to offer? I'd bet on China progressing and moving more in the direction lean and progressive TPS-style management. THAT'S when they will become a competitor to really fear.

Another example of non-lean supply chains, with Tenneco China:

“But quality is uneven because suppliers have little familiarity with statistical process control; employers prefer to use cheap human inspectors instead.”

Reading about the Michigan plant, it does make you realize how good we have here in the U.S. We're driving cars to work, not bikes. The Michigan plant might not have the leanest mindset either:

Tenneco would like to reduce the amount of labor in its mufflers. “The goal is to automate as much as possible,” says supply chain boss Schultz. “We want a lights-out plant.”

I can understand looking to reduce labor costs but the idea of a “lights out plant” is a failed Roger Smith idea from GM and the 1980's, but some still dream of the notion. Lean and TPS value people for their contributions, ideas, and continuous improvement suggestions. It sounds like Tenneco views labor as “workers”, something to automate away.

Didn't we learn a long time ago that Toyota plants were LESS automated than GM plants, yet Toyota had the lower total cost? Automation breaks down and it requires higher-paid people to keep it running. Automation is no cure all. I believe Toyota only automates if Safety mandates it or Quality is demonstrateably better with automation. Look at welding — the stuff that's real dangerous is done by robots. Some welds are done better by people. You don't need to automate everything.

That said, this part of Tenneco Michigan sounds more lean, if you can believe it (would the reporter know what evidence of lean really is, or evidence of “active interest”, or did management tell them that?).

The article ends by highlighting other problems with manufacturing in China — law and order problems, intellectual property issues, etc. Tenneco won't be shipping mufflers from China to the U.S., they say (they're too big and heavy), so China is producing for China. That's the best (maybe the only?) reason to manufacture in China — to be close to customers.

Interesting article. I'm glad FORTUNE brought us that view into the different worlds of the U.S. and China. Who else has experiences with China to share? Are American companies blind to the real working conditions in China? Do they not care, as long as stuff is cheaper? Click “comments” to tell us.

When Ford Was A Startup

Lean Blog Podcast #6– Jamie Flinchbaugh, on the Role of Leadership in Lean