Lack of Clear Visual Controls and Training in the NFL 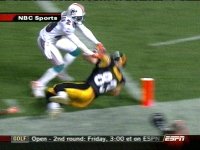 Did you see the Steelers/Dolphins game last night? It probably didn't impact the final score, but there was a long pass to the Steelers TE Heath Miller, 80-some yards, he scored a TD, but it looked like he maybe stepped out of bounds at the 1 yard line (click on the first picture for a closer look, his foot hit the ground right as he was falling). 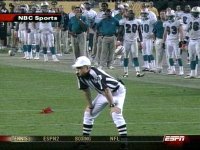 With the NFL replay rules, the coach has to throw a red flag onto the field. Dolphins coach Nick Saban threw the flag, it was clearly laying on the field, but the referee had his back turned to it and didn't see the flag laying there (see the second picture, to the left, again click for a larger view).

The Steelers were allowed to kick the extra point, so it was then too late to review the play. Even if Miller had been ruled out of bounds, the Steelers probably would have scored, but stranger things have happened. The Steelers could have fumbled, etc.

So, do we blame Coach Saban? The ref? This seems like a case of horrible system design. The NFL used to have the refs wired with pagers, so they could be “buzzed” and notified of a replay situation. So, I wondered, as the game went on, why didn't the ref get paged? Why did the coach rely on the flag? Turns out, the NFL did away with the pagers two years ago (according to ESPN SportsCenter). Was this a cost-savings move? An attempt at “simplifying the system?”

Coach Saban said after the game, “They said they didn't see it. Whose fault is that?” It's the fault of poor system design. Instead of blaming the ref, blame the NFL rules committee that didn't anticipate this “failure mode”.

It's hard to believe that, with all of the technology available, that the communication between coach and ref (they're standing maybe 30 yards apart) could be so botched up. They didn't have clear, visual, and unambiguous visual controls to signal “we challenge that call!” 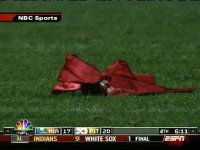 Lean teaches us to have clear, unambiguous signals and visual controls. It also teaches us to think in terms of “FMEA” or “Failure Mode Effects Analysis.” A proactive view would have questioned things, including “What if the coach throws his flag and no official sees it?” For example, they have already asked (with replay flags and penalty flags) “What if the flag flies away in the wind?” Flags are weighted down, they are more like a bean-bag than a flag (see picture to the left). That's an example of better system design (it probably wasn't proactive, some official probably “kaizened” his flag one day after getting annoyed with how the flag floated down to the ground). 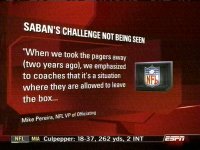 Turns out there was also a training issue. Coach Saban didn't realize that, with the new pager-less NFL system, that he could have literally run out onto the field to get the ref's attention (see pictures to the left). 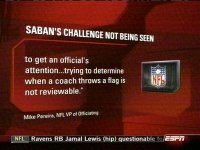 Wow, how crazy would that look? Why do we have to rely on a coach running onto the field? I don't want to count on Bill Parcells running anywhere. So again, bad system design AND a lack of training on coach Saban's part (or shame on the NFL or the Dolphins for not making sure he was trained). Again, it probably didn't impact the final score, but I hope the NFL learns lessons from this. I'm sure every other NFL head coach is now aware of the new rules after watching that!

Lessons to Learn for our Lean Settings?

Any lessons to learn about your own visual controls? Are they really clear and unambiguous to an outside visitor? Don't be blinded by your familiarity with the system where you think “sure, it should be obvious.” Visual controls sometimes aren't as obvious as we think. After all, who would possibly miss a bright red flag thrown onto a field???

I bet this would be a great Lean discussion topic for your team or employees. If you do use this story at work, share your experiences with us. Creative ways of illustrating lean concepts work wonders. Ask your team to go through a “5 Why's” exercise. Why didn't the Replay get reviewed? Why didn't the ref see the flag? Etc.

Discipline and Blame in Healthcare Oversight