Wrong Visual Controls and a Lack of Problem Solving 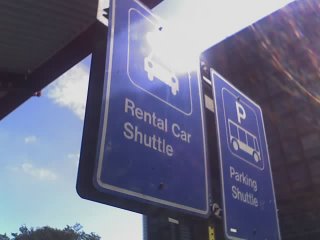 My travel adventures continued… lack of lean concepts abound. The only highlight in my travel was that former Cowboy great and Heisman Trophy winner Roger Staubach was on my flight. We landed in the K gate area of OHare (American Airlines). I folllowed the signs for “Shuttle Bus Center” figuring that's where I would find the shuttle for National rental car.

After a long walk, I got out into the hot muggy 95-degree day and stood under this sign, clearly saying “Rental Car Shuttle” (see the sun-drenched picture to the left). The sign is a “visual control”, in lean parlance. It seemed obvious to me as a visitor. That's a good test of lean visual controls — are they obvious and can they be followed by an outsider?

Well, it seemed obvious until 5 minutes went by and no rental car bus came by. I don't mean that the National bus didn't make an appearance, but NOBODY's shuttle came (Avis, Hertz, etc.) This seemed odd for a busy airport, especially O'Hare at 4:30 PM.

I called National's “customer service” number that's on my Emerald Aisle card. I explained the situation and the phone rep and she said, I guess trying to make a joke, “Maybe they all went on strike while you were standing there.” Since she was unfunny and unhelpful, I eventually got the local National office on the phone, where it got interesting.

I told her where I was standing, by the airport and across from the Hilton, and how no buses were going by. She says, “You're standing in the wrong spot.”

Hmmm. Nice visual controls. I told her I was under a sign that clearly said “Rental Car Shuttle” and she got very argumentative and yelled “It's not OUR fault that the sign is there, other companies put it there, the buses don't come down there.”

I argued that yes it WAS their fault, that other customers were standing here confused like me…. and she hung up!

So what are the lessons here other than National's customer service being useless? I think of the idea of lean problem solving… what problems are happening every day and are they being fixed? I'd have to think that SOMEBODY is being confused by the signs every day and that SOMEBODY must be complaining to National (or to the airport) each and every day. Why haven't they fixed it yet? I guess once the customer has stopped complaining, the problem is “solved” at a very superficial level? I guess National (or at least the people at O'Hare) don't care if their customers have an awful experience? The bus, when I did find it, was VERY full, so I guess business is good.

I called back to National's customer service and told them that my next 9 weeks in Illinois were going to include cars rented through Avis. What problems are plaguing YOUR customers each and every day? Are complaints being turned into change and improvements?

We’re Not Done with Waste