Ohno Circle at the Bank 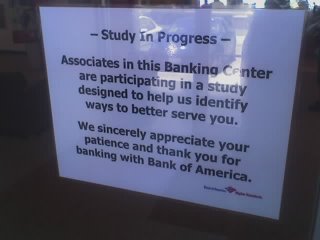 Working from home today, I ran out during lunch time (actually after lunch time in my effort to help level load area businesses) to the bank. As I entered, I saw this sign. By “ways to serve you better”, I assumed they meant new products to cross-sell to me as a Bank of America customer.

I was surprised to see a guy behind the counter apparently doing an “Ohno Circle” type observation. An Ohno Circle is the famous method of Toyota's Taiichi Ohno, who would have a young engineer stand in a circle he drew on the ground. Stand and observe, learn the operation. (Here is an article on Ohno circles and a somewhat silly product that I probably wouldn't buy, as it reminds me too much of the “jump to conclusions mat” from the movie Office Space).

Well, I knew B of A had an active Lean Six Sigma program. This must be part of their efforts. The guy wasn't a young engineer, he was older and quite serious looking in his tie. As I observed the observer (I had a bit of a line to stand in, despite my attempts to arrive at a slow period), I saw him tapping on a tablet PC, obviously recording some sort of data.

I only observed him for five minutes or so (and my sly attempt to take a cell phone picture didn't work). In the course of my work, I'm often in a similar position, observing operations in laboratories and other healthcare settings. I hope he was also taking steps, during the day, to talk with the tellers and other employees, to solicit their ideas, what problems they have, what waste they encounter.

You can only go so far with an “expert” watching the process. You have to also engage people. I know it can be intimidating, sometimes, to be observed. I got a chance today to see how I might look doing that same type of work.

A Toyota Leader on Misunderstandings About the Toyota Production System