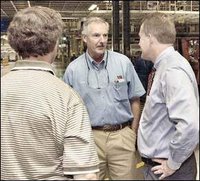 Here is an outstanding profile of Gary Convis, the President of the Toyota Georgetown (KY) plant and the highest-ranking American executive in the company.

I've written about Convis before and have seen him speak at a lean conference. He really seems to exemplify what you would want to see in a “lean leader”, in his words and his manner.

Convis, who relaxes by playing golf and riding a Harley Davidson, describes his management style as leading by example and not asking others to do what he wouldn't do himself.

“You respect people,” he said. “You listen to them, you work together. You don't blame them. Maybe the process was not set up well, so it was easy to make a mistake.”

Convis also has a dedication to the Toyota production system, knowing it well enough to solve problems and “sell” the solutions to the workers, who, by the way, must be appreciated and cared for, he said.

That's all done in the traditionally humble style of Japanese managers.

These days, Convis still oversees the Georgetown plant and its 7,000 employees. But he's also traveling to other Toyota plants and focusing more on long-term strategic planning.

But he won't give up one activity that dates back to his early days in the auto industry: walking the manufacturing floor.

He does it whenever he can.

“It's my favorite time of the day,” he said. “It's where I grew up and that's where we add value. I like to say that the rest of us are all overhead. If I don't add value, there's no reason for me to be there.”

Peggy Ferris, a conveyance manager in the Georgetown plant who has known Convis since he came to the plant in 2000, said he's a president who connects well with workers.

“To me, Gary is always teaching,” she said. “He's a president that's very involved in the daily activities and projects. When he sees you're at a stumbling block, he offers support and follow-up, and then follow-up on that support to see if it's helped you,” she said. “…He's out there on the floor and he's interested, and people respond to that.”

Convis said it's not about being a boss, but about being a facilitator and a coach. When he became a vice president at Toyota, his supervisor told him to manage as if he had no power.

“I thought about that and I thought ‘My goodness â€” what an amazing approach.' And I thought at the time, would a North American executive in a similar type of business ever say that to a newly promoted person? Never. So I've never forgotten that.”