I’d Like to "5S" the Wimbledon TV Broadcast Screen

Hello from jolly old England. I'm in London for the Lean Healthcare Transformation Summit being put on today by Daniel T. Jones of the Lean Enterprise Academy.

This post, strangely enough, has nothing to do with healthcare. But, I was thinking about England while watching the amazing Wimbledon final match between Federer and Roddick.

Watching the match on a widescreen HDTV, I got to wondering about the score box that's constantly on screen. For about 1/4 of the serves, part of the action was obscured by the score box. 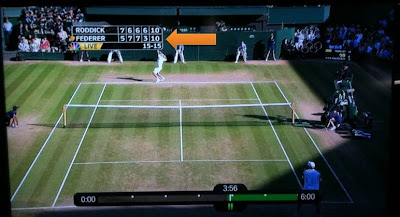 Federer's serve, shown above, is coming right out of the score box.

But look at all of the wasted real estate to the side. Why not put the score box there? We can't say “it's always been there” since the score probably wasn't constantly on the screen until ten years ago or so? Tennis is not a sport that benefits from widescreen… you get more of the part of the stadium where the action doesn't normally occur. Tennis does benefit from HD… I guess it would be too disorienting to watch a tennis match that goes sideways? But the best seats at the stadium are center court… on the side.

My suggestion to NBC would be this — why not put the score box vertically off to the side? I would have the numbers right side up, of course. 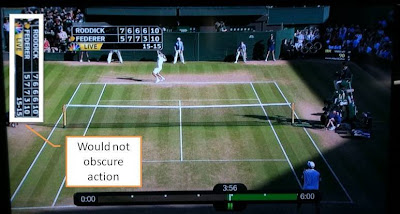 Wouldn't this work better? How do I submit a suggestion to NBC? I wonder what their thought process is? I guess it's “value” to being able to see the score, but so is seeing the serve.

OK, maybe not the most profound Lean thoughts ever, but this seems so obvious (to move the score box), I wonder what I'm missing or not thinking of?

The New GM Is No Longer the "Leaner" GM?

When It’s Easier to Distort the System Than it is to Improve It: Baseball…