I know how much Mark dislikes headlines that rhyme with lean, but perhaps he'll make an exception for this example of everyday lean:

At a hotel this weekend, somewhere between my first and second Kleenex, I realized, just barely, that something had changed. It was so subtle that at first I thought I was imagining things, but I wasn't. The first tissue was white. The second was yellow. (See below–the difference is subtle and hard to see). 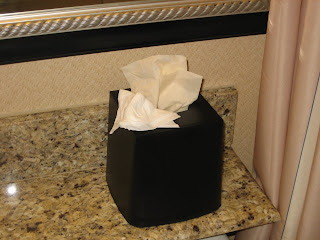 Lean thinker that I am, I quickly suspected what was going on confirmed my suspicions with a quick look at the bottom of the box. This was Kleenex's “Signal” style box for commercial customers, like hotels. At the bottom of the box the last few tissues are a different color from the rest, signaling the maid that it's time to replace the box.

Sure enough, the next day the maid had pulled the last few yellow tissues and stuffed them into the top of the new box filled with white tissues. Fabulous example of a visual control in every day life!