Thoughts on Driving a Prius

So I've finally become a Toyota driver, driving an employer-provided Prius for over a month now. Answer to the first question I usually get, 42.9 MPG is what I'm getting (and that's mostly “around town” driving).

Second question, yes it's an ugly car. It's homely and odd shaped (for aerodynamics). But, it's also distinctive — some of the features I find “ugly” can't have anything to do with aerodynamics (the tail lights). Is the design partly to be a rolling Toyota-awareness machine? It could be uglier.

Generally speaking, it's fine to drive. It's small, so I feel somewhat over matched on Texas roads, but it's peppy enough and is surprisingly OK to drive. Nothing to rave about, but not horrible.

Some of things that have jumped out at me early. First, was the imperfect delivery experience (my license plate frame problem) that I blogged about already.

Second is the process for starting the car. Starting a car is a somewhat standardized experience (with exceptions like Saab's quirky key location). With Prius, Toyota has changed pretty much everything about starting a car, which can be disorienting. I linked to the NY Times article about wireless key fobs — my Prius does not have the “leave the keyfob in your pocket” feature. So here is the process for starting mine: 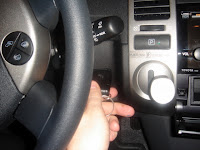 1) Insert keyfob into dash. The keyfob slot is strangely spring loaded. So, if you don't insert the keyfob far enough, it springs back and flies out of the slot. I've done this twice and, each time, the keyfob has flown and landed between the driver's seat and the center console, landing under the seat in a spot that's not so fun to reach. I'm not sure why it works this way, the springiness, and I haven't figured out how to “error proof” it other than to “be careful,” which isn't effective error proofing. 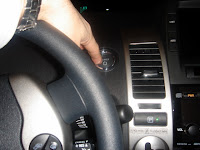 2) Push the “Power” button. I don't really have a problem with this, but it's a somewhat awkward reach (I usually use my right hand, but I was taking the picture with my right hand). It got me wondering “what if I was left handed?” Not as irritating as #1 though, nor is it as puzzling as #3, below. 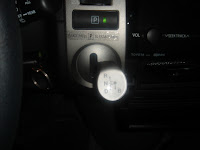 3) The picture shows the gear shift. Again, it's not the typical approach. Many people have asked (included a valet parking guy), “What does B mean?” It reminds me of the time Homer Simpson was buying a cheap Russian car and the salesman told him “Put it in H!”. “B” is like a “low gear” mode, I was told, for driving down a mountain. For the life of me, I couldn't figure out what “B” would signify. It means “Brake” mode apparently, which operates like “low gear” but Prius only has one gear. Living in Dallas, I won't be coming across mountains.

The other thing that threw me off a bit (and I've gotten used to thankfully), is pushing “forward” (up) on the shifter for reverse and pulling “back” (down) for driving forward. Is this because “D” is usually down in the shifter after reverse? Maybe that's a dumb thing to worry about (and I'm sure an automotive engineer reading this can correct me). Update: This was questioned two years ago on another blog.

When you put the Prius in R, there are beeps to indicate that you're in reverse mode (like a large truck, I guess). But, the beeps aren't audible outside of the vehicle, where it would actually be helpful (since the Prius is pretty quiet when in battery-only mode, such as just starting out). It would be more helpful as an external beep (especially since many drivers turn off the beep, given this choice of websites that show you how).

My only other comment is that the driver's floor mat is wearing pretty quickly, pieces of fuzz are coming up and off of the carpeted mat. Doesn't seem like it was designed for much use.

Anyone else have comparable Prius experiences? Toyota might have had very good reasons for changing the car starting experience. But, at what point is it better to stay with an older, imperfect standard, as opposed to coming up with a new one? Does that conflict come up at all in your daily work?

"That’s What We’re Here For"