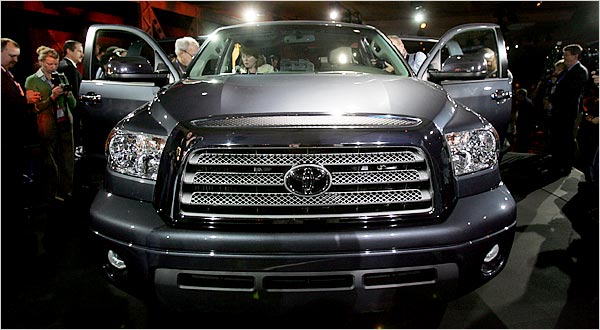 Lots of Toyota news with the new Tundra and the Detroit Auto Show going on:

Toyota Enters the Auto Show With a Swagger (NY Times)

No longer does Toyota fear the reaction it faced as recently as the 1990s, like accusations that it had dumped minivans at lower prices than it charged at home, or a tax on its imported luxury vehicles that Detroit carmakers did not have to pay.

“The fact of the matter is that there is very little, surprisingly little backlash,” said Yukitoshi Funo, the chief executive of Toyota Motor North America and the company's highest-ranking executive here.

The article also talks about how this Tundra was the first to be designed and built completely in the U.S., with a quote from friend of the blog Jeff Liker:

That is not an easy transition, in what has been a Japan-centric company, said Jeffrey K. Liker, a professor of engineering at the University of Michigan.”For them, the real risk of globalization has been diluting their culture and losing their identity as a company,” he said. “They've been working very hard to avoid that, but at the same time they'll admit that's been difficult for them.”

Swaggering or nervous? Which is it? Does Toyota have reason to be nervous? From the article:

But in stark contrast to the days of widespread — and literal — “bashing” of Japanese cars by American workers and politicians in the 1980s, Japan's creeping dominance of the U.S. market today has hardly raised a peep of protest.

“Lobbyists haven't been making any noise. How could they, when GM imports cars from Korea?” said Ashvin Chotai, a research director at Global Insight.

The WSJ says Toyota has to increase North American production even more to avoid criticism for importing so many vehicles. Is it Toyota's fault that their market share is increasing faster than they can open new plants? Seems like the market is speaking.

Some company insiders say the Japanese auto maker, which is gearing to pick a site for its eighth North American vehicle-assembly plant as early as this month, may soon need to start looking for a site for a ninth plant. That's because its North American production ratio — a figure that measures how localized and “American” Toyota is by comparing the number of vehicles Toyota builds in North America with its imports from Japan — has been plunging because of surging imports.

David Meier on Getting Up and Starting Again

Ken Pilone, the Author of Lean Leadership on a Napkin; Toyota Says “Lean”…