USATODAY.com – Get your Bladder Buddy here, on Cowell's ‘Inventor'

So it's a bit of a corny reality show with the required melodrama, but I liked some aspects of ABC's new show “American Inventor.” If you fast forward through the crap (thanks ReplayTV), you can actually see some clever ideas.

My favorite was a shovel designed for filling sandbags and I think it illustrates creativity and the type of kaizen thinking that we should all encourage in our organizations.

A 43 year-old handy man invented a much-improved shovel, they accepted him to the next round of the show. 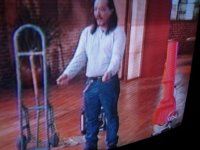 Here is a shot of the shovel, the red plastic on the right. I think he prototyped it originally using ducting and a shovel end. He invested $20k, mortgaging/selling his house, to have a plastic model made. 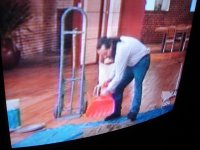 Here he is scooping up sand. The sand bag was placed on the open end, the top of the shovel was an open tube, now it has a bag on it. 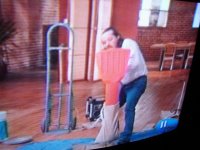 After scooping, you tip the shovel back up right and the sand falls down the tube right into the bag.

This inventor has more than doubled (if not tripled) the productivity of sand bag making. This would be very helpful for flood prevention, hurricane relief, etc.

I hope you can get a sense of how this works from the pictures. Very creative, kaizen applied to sandbag making. Great product! Unlike a silly singing contest, this show might actually inspire people to be creative. It inspires me to look for opportunities for kaizen. The invention, like many good ones, seems so obvious when you see it, but that's what makes it inventive.

Good kaizen ideas are like that too, such as putting aluminum foil on the carriers at NUMMI. Seemed so obvious in hindsight, but it really took creativity for someone to come up with the idea.

We’re ALL Done With Batching?

A Lean Product in How Many Ways?

In Memoriam: Podcast Guests Who Have Passed Away