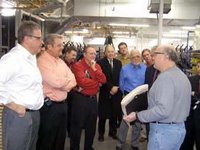 Here is a nice story from Missouri about how La-Z-Boy is converting it's plant (and others) from “batch and queue” to a lean, cellular production layout. Using lean to cut cycle times and costs is a great way of competing with China, particularly with furniture being large and expensive to ship.

In the new concept, the chair or sofa is manufactured by a team within a cell, thus eliminating separate departments. No jobs will be lost in the transition from batch-and-queue to lean cellular.

That's great that they've apparently taken the “no layoffs” pledge, which is critical for maintaining employee involvement. I'm certain the cellular layout would require fewer people than batch-and-queue, but it sounds like the company is trying to grow, as well, which means they can avoid additional hiring.

The primary purpose of the new concept is to increase product numbers. The cells have become so efficient that it has cut the manufacturing time of a chair down from two and one-half days to just three hours.

“This is now a three-hour process from start to finish in the cell,” said La-Z-Boy Midwest production manager Bill Snow. “The process ends with a 12-point inspection. The cell members will not get paid for the piece until it is taken to where it will boxed. But eventually, boxing will take place in the cell as well.”

Again, I like the sound of that, except for “will not get paid for the piece…” which certainly sounds like a “piece work” pay system. The problem with piece work is that, often times, quantity is encouraged over quality. Sure, you can say “we only pay for good quality pieces,” but the incentive is still there to work faster. Instead of working faster, a lean cell needs to run at the rate of customer demand (the concept of takt time). If it were my plant, I'd rather see an hourly wage paid, with a bonus structure for plant performance.

Again, this is nice to see. They are focused on running the plant differently, it appears, not just changing the layout and saying “we're now lean.” Good luck to everyone at the La-Z-Boy plant!

"The Customer Is God"

Covid-19: Don’t Blame Toyota or “Just in Time” for Your Risky…