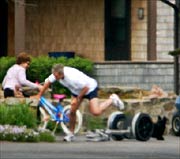 rtation device that was supposed to revolutionize how cities are built. Of course, I don't know anyone who is currently building a new city from the ground up, but that's a different story. You're not supposed to be able to fall off, but as you can see, that isn't quite true either. I never believed the hype of this product. As an engineer, I can appreciate it's brilliant concepts. But as a product, that people must buy, it was a different view. But I want to focus on a different aspect, a note at the end of the story that said:

“Life,” Kamen says, “is too short for incrementalism.” It's a big statement, and, put simply, untrue. Incrementalism might not inspire an initial burst of invention (Kamen is definitely the expert on that), but it's a pretty good description of how inventions actually make it into the real world when the publicity is gone.

I think Kamen's got it wrong. Life is too short for small dreams, small visions. We should pursue a vision that will outlast ourselves, pursue something so worthwhile that the challenge will keep us occupied and its worth the effort of not just one man or woman, but many. But the pursuit of that dream, that vision, MUST be pursued incrementally. Very few changes occur with a big bang. The internet started in 1968 (depending on your definition) but took until the 1990's to really be meaningful. Ohno worked on the Toyota Production System for decades, and even upon his death believed he had only achieved a fraction of what he thought was necessary.

Change must occur daily, in small steps. Don't pursue a strategy of planning for 5 years and then change in a day. Make change each day. Those incremental steps, that Kaman denounces, add up to massive progress over time.

Manufacturers Must Lean Forward, Not Backward